Mark Kaboly is reporting via Twitter that Pittsburgh Steelers starting right outside linebacker James Harrison is now back at the Steelers facility following his one week suspension for hitting Cleveland Browns quarterback Colt McCoy helmet-to-helmet back in week 14. The suspension to Harrison was handed down last Tuesday and Harrison has not been allowed at the Steelers facility for a week. Harrison appealed the suspension, but it was denied. The suspension did not keep Harrison out of the public spotlight as he has been very vocal on his Twitter account, that included remarks on several hits in games over the week. Harrison specifically chimed in on the hit by Cowboys safety Abram Elam on Tampa Bay Buccaneers wide receiver Michael Spurlock late in the Saturday night game as well as the violent sack of New England Patriots quarterback Tom Brady by the Denver Broncos.

Last night Harrison was referenced during the blackout by Steelers quarterback Ben Roethlisberger when a fan ran out onto the field during the stoppage of play. Roethlisberger was heard saying, “Where\’s James Harrison when you need him?” The comment was in reference to a the Steelers 2004 game against the Browns, when Harrison picked up and body slammed a fan that ran onto the field. That action reportedly even drove that fan to sobriety now according to reports last week. Harrison also commented last night on Twitter during the stoppage, “If I can\’t play then can\’t nobody play…Lights out!” That comment was instantly circulated on television and throughout all of the social media sites. There is now a Photoshop picture making the rounds of Harrison supposedly cutting off the power to Candlestick Park.

The Steelers missed Harrison last night in their 20-3 loss to the San Francisco 49ers as second year linebacker Jason Worilds was forced to make his first career start at right outside linebacker because of the Harrison suspension. Worilds did not have a good game and the Steelers did not record a sack of 49ers quarterback Alex Smith on the night.

Welcome back James, we all missed you. 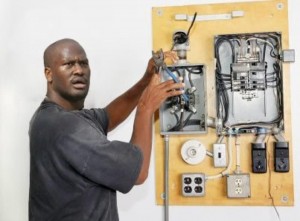