The Dallas Cowboys game Saturday night against the Tampa Bay Buccaneers was pretty much a laugher from the get-go, but two Pittsburgh Steelers players did not get a laugh out of the Cowboys final defensive play of the game. On 4th down and 12 from the Buccaneers 18 yard-line, Buccaneers quarterback Josh Freeman threw a pass down the right sideline to wide receiver Michael Spurlock, who had a step on Cowboys cornerback Terence Newman. The ball seemed to be slightly overthrown and Spurlock let up when he caught Cowboys safety Abram Elam closing out of the corner of his eye. The pictures below show the ball past Spurlock and he is pretty much in a defenseless position and here is the video replay that the NFL proudly has posted up on their site for you to see. Elam lands a hit to Spurlock up high near the head and neck area after it looks like he launched himself doing so. Spurlock was clearly defenseless on the play and could have been seriously injured. Elam was not flagged on the play, but Steelers linebackers James Harrison and James Farrior clearly thought he should have been, in light of the serious crack down by the league as far as hits on defenseless players go.

I circled the ball below in the 1st & 3rd screenshots. 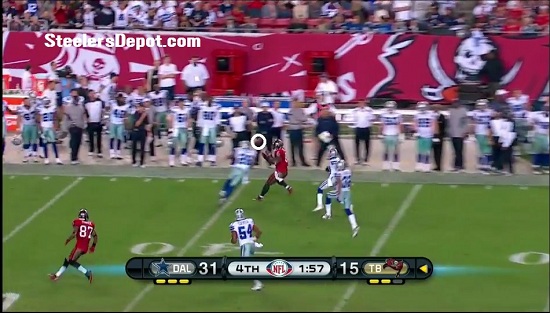 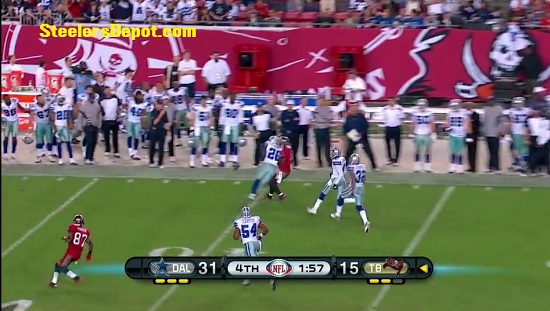 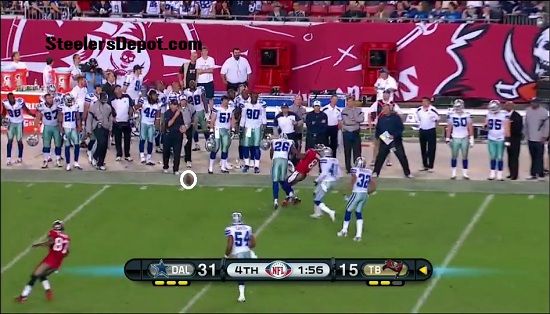 Both Harrison and Farrior tweeted within minutes of one another nearly the same comment as Harrison tweeted first, “Wow! I guess it is just us!” and Farrior followed with a tweet of his own that read, “Wow. It is just us!!!!” Both were insinuating that only the Steelers get those types of flags thrown on them for the same type of hits, but not other teams. The only real difference between the hit that Elam laid on Spurlock, and the one Steelers safety Ryan Clark laid on Baltimore Ravens tight end Ed Dickson back in week 10, is that Dickson caught the ball and lowered his head into the path of Clark at the last moment. Clark was flagged on the play and later fined $40,000 for the hit.

On Wednesday, the NFL released a new seven-minute video to all of the teams in the league that tried to show the difference between a legal and an illegal hit on a receiver. The video is narrated by NFL Vice President of Officiating Carl Johnson and it is quite comical to watch. Johnson stresses in the video that the defenders need to “lower their target” and made a point to feature the hit by Clark on Dickson as an illegal one. Judging by what Johnson said in the video, the hit by Elam was an illegal one as well, but it was not flagged. We will have to wait until Tuesday or Wednesday to see if Elam is fined, but I have a feeling that that the Cowboys player will get off scot-free. Had that been Clark, he would likely be facing a one-game suspension like Harrison received this past Tuesday.

All you can do is shake your head, but be sure to lower it while shaking it when you play the Steelers as it will surely draw a flag and a fine. The Pandora box is wide open right now and it is too bad a Steelers defenders can\’t hit it after it makes catch. Hypocrisy, catch it!