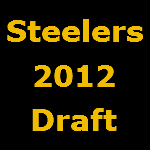 During the Steelers bye week I have had several request to start looking forward to the Steelers 2012 draft and while I think mock drafts are pretty ludicrous to throw out there right now with 6 weeks left in the 2011 season and the bowl games yet to be played, I will wet your appetite with what I see as the possible needs for the Steelers based on what we have seen through the first 10 weeks to go along with the impending potential 2012 salary cap challenges I wrote about earlier in the season.

I take my mock drafts pretty serious, as you have seen over the years, and have quite a bit of scouting and research left to do before I release my first one. Just throwing names out there off of a master ranking list in November would not be doing my readers a service as the bowl games and Senior Bowl will really better sort out the college prospects and make scouting players much easier. Once the underclassmen declare, it also will paint a much better picture of what the 2012 draft pool will be.

Left Guard – His arthritic knee aside, Chris Kemoeatu has two years remaining on his contract and is scheduled to count almost $5.262 against the salary cap next year. He has already missed a few games this year with his knee and I would be surprised if he doesn\’t miss another one or two before the season is over. While he is still one of the better trapping guards in the league when healthy, his pass protection continues to be a huge concern. I fully expect the Steelers to part ways with him after June 1st so they can stretch out the dead money over a two year period. Doug Legursky will be a restricted free agent after this season and I fully expect him to be tendered and re-signed with ease and is best suited to remain a back-up center and swing guard. Regardless of what happens with Kemoeatu, a guard will likely be on the early shopping list for the Steelers. I could see Legursky competing with the draft pick to start the season at left guard as rookie interior linemen have an easier time contributing right away in the league. I fully expect Ramon Foster, also a restricted free agent to be tendered and retained as well.

Nose Tackle – Veteran Casey Hampton is currently scheduled to count almost $8.057 in 2012, according to my numbers, but there is no way he can be retained at that price. The Steelers will likely approach him to lower that number with an extension or he too could be a post June 1st salary cap casualty. Regardless of what happens with him, the Steelers need to draft a nose tackle of the future. Chris Hoke will be unrestricted once again following the season and might just decide to call it a career. Steve McLendon has come on strong this season, but there are concerns with his size moving forward as an every base formation down nose tackle. McLendon will be an exclusive rights free agent after the season and will be back in 2012 baring some sort of unforeseen circumstance like a career ending injury. At worst he will be the back-up in 2012 in my opinion.

Inside Linebacker – 2011 will likely be it for James Farrior as I wrote previously as he is scheduled to earn $3.825 in 2012. With Larry Foote scheduled to count $3.6 million in 2012, the Steelers will be forced to depart with one or even both because of cap concerns. At very best, Foote is retained and his cap number lowered with a short extension. Foote left once and certainly does not want to leave again. Stevenson Sylvester hopefully will be able to assume the Buck role if both Farrior and Foote are gone, but I have not seen enough of him to have total confidence in that just yet. The inside linebacker class is regarded as a deep one this year and this could be addressed within the first 3 rounds easily.

Free Safety – Ryan Clark still has two years remaining on his contract and it is not totally out of the question he too could be cap casualty after June 1st. In the end I think he stays, but regardless the Steelers need to start grooming someone to take over in 2013. Ryan Mundy should be easily retained as a restricted free agent to back up both Troy Polamalu and Clark, but there is no guarantee that Will Allen will return despite having a year left on his contract. The free safety class, much like the inside linebacker class, looks to be deeper this year then it previously has, so good value can be found here in the middle rounds of the draft.

Wide Receiver – Mike Wallace will be a restricted free agent when this season ends and almost certainly will be locked up long term. Antonio Brown and Emmanuel Sanders are the future, but Sanders has battled foot problems and now a knee problem early in his career. 2011 is looking more and more likely to be it for Hines Ward and right now the future of Jerricho Cotchery with the Steelers after this season is up in the air. Cotchery is looking for one last pay day and should he contribute greatly down the stretch, he might be tough for the Steelers to lock up long term. While I think Sanders will recover and start contributing, spending a 4th or 5th round pick on another slot receiver type is not out of the question.

Defensive End – Brett Keisel is having a fantastic season and behind him waits 2011 number one pick Cameron Heyward. As we sit here 10 weeks into the season it is hard not to see Keisel returning as he has two years left under contract. He still should not be ruled out completely as a salary cap casualty however. Personally I hope he is retained. Aaron Smith is almost certain to retire now so that leaves just Ziggy Hood on the left side. Behind Hood currently sits recently signed Al Woods and Corbin Bryant remains on the practice squad. The Steelers are reportedly high on both, but it makes sense to add another 5 technique left or right defensive end in the later rounds.

Tackle – Right tackle Willie Colon should return to health in 2012 and Marcus Gilbert will likely be flipped over to left tackle. Max Starks future is uncertain, but should he continue to play at the level he has since being re-signed, it would make sense they try to re-sign him to another one or two year deal. The salary cap situation will play a huge role in this decision as will the asking price for Starks. Jonathan Scott is under contract for $2.7 million next year and all that means is he is an easy cap casualty that will save the Steelers $2.2 million to throw the way of Starks if they so decide. A late round tackle in this draft would likely have a tough time making the 53 man roster if Starks is back, but at the very least could be a practice squad project.

Cornerback – The Steelers could very well end up with a late compensatory draft pick this year for Matt Spaeth and if they do get the extra pick, we will throw in a late round cornerback for good measure. Keenan Lewis should be back as a restricted free agent, but Bryant McFadden almost certainly will not. William Gay will also be unrestricted, so there is a chance that the Steelers will have two spots to fill there. Cortez Allen and Curtis Brown figure to play a much bigger role in 2012, so the Steelers have time to take a late project, most likely from a small school.