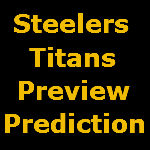 The Steelers return home on Sunday to play the Tennessee Titans after being on the road the last two weeks. The Steelers injury report is long with 4 starters already ruled out and a 5th one is possible depending on the status of Rashard Mendenhall. As I do each and every week, here are my 7 things to watch for this week against the Titans if the Steelers want to win the game. At the bottom is my score prediction and I will have my week 5 picks and predictions up for the other games later tonight.

Run Red Run – At the time I write this, Mendenhall is still questionable with a hamstring injury. He was only able to practice on a limited basis on Friday and regardless of his gameday status, Isaac Redman could get some extended work on Sunday against the Titans. Mewelde Moore was ruled out Friday with an ankle sprain so that too plays in the favor of Redman getting extra snaps. Redman has run very well between the tackle this season in limited carries and provided the Steelers a nice spark in the second half against the Texans last week. He very rarely goes down on first contact and always seems to be able to fall forward for an extra yard once he is brought down. With the offensive line continuing its state of flux this week, the Steelers need to establish the run to take pressure off of the pass protection. Redman is averaging 4.9 yards per carry on just 22 carries this season and chipped in another 18 yards on 2 receptions. He has rounded into a complete back and can recognize and pick up blitzers when the need arises. This could be a break out game for Redman if given the bulk of the work this week. The Steelers could use the jump start to the running game ranks 23rd in the league with a 3.71 yards per rush average.

Starks Contrast – Newly re-signed tackle Max Starks looks to start this week at left tackle after having just 3 practices under his belt since re-signing. Starks last took a snap 11 months ago against the Bengals and reportedly is back down to his normal playing weight. Prior to getting placed on injured reserve last year season, Starks play was below the line in both run and pass blocking. How much of that was caused by injuries we will never know as Starks was more than capable in 2009 despite allowing 8 sacks. The Steelers would be smart to run early to get Starks acclimated back to the speed of the game and not ask him to pass block long when quarterback Ben Roethlisberger drops back to pass. It is hard to believe he could be much worse than Jonathan Scott and Trai Essex thus far this season, but they need to be smart with him if he indeed gets the green light this week.

Keep Your Feet – The Steelers defensive line has been manhandled in 3 of the first 4 games and both the Ravens and Texans put on cut block clinics against the Steelers front 3. Nose tackle Casey Hampton and defensive end Aaron Smith will both miss Sunday with injuries, but the Steelers will get back right defensive end Brett Keisel this week. Keisel, Ziggy Hood, Cameron Heyward, Chris Hoke and Steve McLendon will all get the task of stopping the ever dangerous Chris Johnson and they must do a better job at staying on their feet versus the Titans zone blocking scheme and better hold the point of attack. The Titans will want to run early and often as they look to improve their 32nd ranked run offense and build off of the 100-yard performance by Johnson last week against the Browns.

Law Dog – Right outside linebacker James Harrison is out for a few weeks with after surgery to repair a fractured right orbital bone suffered last week against the Texans. With Jason Worilds also out with a quad injury this week, Lawrence Timmons will slide outside. Timmons has had some playing time at the spot in the past and will be responsible for containing the outside run and forcing Johnson back inside to his help. Timmons has gotten off to a slow start this season and will be able to get more opportunities after quarterback Matt Hasselbeck this week via the pass rush. Titans left tackle Michael Roos has had a nice start to the season in both the run block and pass protection areas so Timmons will certainly have his hands full. Timmons will need to use his speed and agility to beat Roos and put much needed pressure on Hasselbeck. The last time Timmons played significant time outside was against the Titans, and he played well.

Short & Sweet – The Steelers offense likes to thrive on explosive plays, but this week offensive coordinator Bruce Arians needs to dial things back in the passing game so that Roethlisberger does not continue to take so many hits. Short, quick slants to Mike Wallace, back shoulder throws to Antonio Brown and quick passes to Heath Miller in the middle part of the field should be the game plan. This does not mean that that Roethlisberger needs to abandon the deep ball altogether, but he needs to pick his spots better. A strong running effort earlier should get a safety up and help bring some play action into play. The offense needs to be conservative early in an effort to get give the 5th combination of a Steeler line this season time to acclimate to each other. It should be more of a take what they give you attitude on offense this week.

City Of Troy – Along with Ike Taylor, Troy Polamalu as been one of the few bright spots this season on the Steelers defense. He must be allowed to improvise and move all over the field based on what he sees. Taylor should be able to hold down the outside and both William Gay and Keenan Lewis have had a respectful start to the season on the other side. Polamalu could see considerable time in the box to provide needed run support to Larry Foote and James Farrior. I think this could be a game that Polamalu makes two big splash plays in. Just let Troy be Troy.

Milk Carton Turnovers – The Steelers defense must start forcing and getting turnovers. Through four weeks they have only tallied one against the Colts and Polamalu returned it for a touchdown. Special teams fits in this category as well as they very well could have gotten the game last week against the Texans to a different start had they recovered the opening kickoff return fumble by Danieal Manning. The Titans have only turned the ball over 5 times through the first 4 games with Hasselbeck throwing just 3 interceptions thus far.

Steelers Titans Game Prediction – The thing most heard this week was how “hacked off” the Steelers defense is following the loss to the Texans. Before the season started this game was circled as an easy win on the schedule but that has all changed now. The Titans have played well through the first 4 games and will look to exploit the Steelers defense the same way the Ravens, Colts and Texans have done this year. I think the Steelers will bounce back this week with a better showing and I think Redman, Timmons and Polamalu all make big contributions in this game. I do not think it will be a blow-out but I think the Steelers cover the spread and move on to week 6 at 3-2.