Below is the defensive participation chart for the Steelers week 4 game versus the Houston Texans this past Sunday.

The first noticeable thing is that the Steelers were only in the nickel for 14 non-penalty plays on defense due to the multiple 2 and 3 tight end personnel packages that the Texans used. Because of that, Keenan Lewis only saw 14 snaps this past week.

Cameron Heyward saw an increase in snaps this week partly due to Aaron Smith going down with a foot injury. He saw a season high 29 defensive snaps this past week. Jason Worilds also saw snaps this week when James Harrison left for a while with his eye injury.

James Farrior saw the bulk of the snaps inside as Larry Foote was sidelined early with a stinger.

Click on the image below to see the full PDF version of the defensive participation chart. 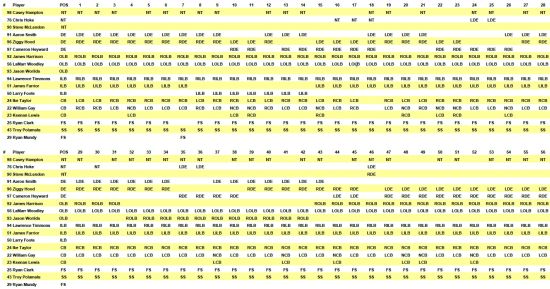