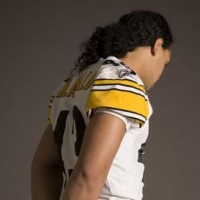 After the lockout ended the Steelers had five key players that they had to sort through contract wise. Two of those five players were unrestricted free agents in the form of Ike Taylor and Willie Colon. One was LaMarr Woodley who was wearing the franchise tag and the other two were players entering the final year of their contracts in Lawrence Timmons and Troy Polamalu.

Taylor and Colon were quickly re-signed at the beginning of free agency and as expected, a new deal for Woodley followed about a week later. At that time the Steelers only had Timmons and Polamalu left on the to-do list and they chose to lock up Timmons first, as it was announced today that he received a new 6-year, $50 million dollar deal.

So that now leaves Polamalu as the last man standing on the list. Polamalu is the face of the franchise, the face of the NFL and the face of a solid human being. Since the lockout ended and Polamalu reported to camp, he has said all of the right things. He has done numerous interviews and towed the company line. He has professed his want to retire in the black and gold and has gone about preparing for the 2011 season like every other season before.

It may have been just another preseason game to most this past week against the Eagles, but it is hard to ignore the fact that #43 was all over the place last Thursday night when he was in the game. It was classic Polamalu on display. If Troy is still not 100%, I will take whatever percent he indeed was against the Eagles and so would 31 other teams in the NFL.

While many will say that the Steelers can\’t afford to get Polamalu done now, I say they can\’t afford not to get Troy done now. For starters, he is scheduled to count roughly $8.6 million against the cap this year and a new deal will easily bring that number way down. The Steelers are currently around $2-3 million under the cap after the Timmons signing today and they could use the extra cap room in case they need to bring back Max Starks, Flozell Adams or another soon to be released lineman.

The Steelers also can\’t afford to not reward their most prized and respected possession, as all of the team is watching this situation closely. Future Steeler players are also watching this as well. What type of message does it send to the rest of the team and future players if they make Troy wait? Players will see that it does not pay to live up to the highest standards set forth by the most successful organization in the league. It sends a message that it is not what have you done for us lately, or in Troy\’s case his entire career both on and off the field, but what more can you do for us?

I certainly understand that the NFL is a business and that the older a player gets, the riskier it is to lock that player up with a big deal. Players and teams futures are at risk with every snap of the football though. It is part of the game and why players are rewarded for being on top of their game. Players like Polamalu. If you were ever going to take that risk, he is the one to take it on.