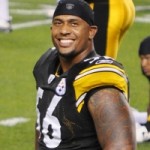 Last night it was announced that the Chiefs signed outside linebacker Tamba Hali to a 5-year $60 million dollar contract with $35 million of it guaranteed. It is unknown early on how the contract is structured, but it most certainly will lower the 2011 tag charge of $10 million that Hali has been walking around with.

If that scenario sounds familiar, it is because it is. Steelers outside linebacker LaMarr Woodley is walking around with the same tag and the Steelers reportedly have opened up negotiations with him on a long term deal, but it is nowhere close to getting done yet. “We just have to get the number right,” Woodley said when asked about the talks.

The number will likely come in somewhere around the per year average of around $11-12 million for Woodley, if and when they get a deal done. Just last year, 49ers linebacker Patrick Willis signed a five-year, $50 million extension and before that, Cowboys outside linebacker DeMarcus Ware signed a six-year contract extension back in October of 2009 worth $78 million, with $40 million guaranteed. Fellow outside linebacker James Harrison signed a six-year, $51.175 million contract back in the spring of 2009 as well. That contract included about $20 million in bonuses with Harrison received a $10-million signing bonus up front and a $2.555-million roster bonus for 2009.

Most people get caught up with the overall deal number, but it is better to look at the guaranteed number instead. I do not have the break down of any of these contracts, but they likely include several roster bonuses and LTBE (likely to be earned incentives) as well. Do not be alarmed.

The Steelers should be just fine after this season and able to get Lawrence Timmons locked up next offseason as well. James Farrior and Larry Foote are likely playing their last year in the black and gold and despite the big extension Harrison signed just two years ago, he becomes a little easier to release after this year should his play fall of. Former draft picks Jason Worilds and Stevenson Sylvester should be ready for much bigger roles next year as well.

The Steelers could very well let Timmons wear the franchise tag next offseason, while they work out a long term deal with him next training camp. The Steelers also have Troy Polamalu entering the final year of his contract this year and he would figure to be negotiating a long term extension right now like Woodley is. Of course they could flip-flop the two and do Timmons now and let Polamalu wear the tag. Steelers chief negotiator Omar Khan is one of the best in the business in making the salary cap numbers work and I expect that once he gets past the current chore of getting the Steelers cap compliant by Friday, he will turn his attention towards Woodley, Polamalu and Timmons.

I fully expect two of the three to be signed to extensions by the start of the 2011 season, but like anything in life, there are no guarantees, just guaranteed portions of contracts.