On Saturday, day 3 of training camp started off quickly again as Plaxico Burress was at Latrobe to visit with Mike Tomlin, Kevin Colbert, Omar Kahn and spend some time with his former teammates. Burress was at training camp most of the day Pittsburgh Tribune-Review beat writer Mark Kaboly had a PlaxWatch going throughout the afternoon with great coverage. Burress looked very comfortable per reports and appeared to have a one-on-one with Colbert and Kahn to perhaps talk numbers. Afterwards he was seen making several cell phone calls and smiling quite a bit. It would be easy to speculate that a deal may have been struck, but that was not the case. Burress ended up leaving and was reportedly headed to San Francisco next to visit with the 49ers. He is expected to make a decision by Monday as it seems the Jets and Eagles are interested as well. It seems the Giants interest may have cooled after he met with Tom Coughlin Friday. Ed Bouchette blogged that he thinks Burress ends up with the Jets. Time will tell.

It was announced this morning that a 21st undrafted free agent was signed and it is defensive end Corbin Bryant from Northwestern, who the Steelers had eyes on prior to the draft.

Burress was not the only visitor today as unrestricted free agent tight end Daniel Graham was also at Latrobe early today. He had been released by the Broncos before the lockout started. His signing is not imminent right now though as the Steelers are still over the cap after signing a few of their own free agents and all of their draft picks. They have until Thursday to get in compliance. He does appear to be a fit though as a pass catching and blocking tight end.

Colbert met the media mid-morning to talk about the Burress visit as well as the struggles they face in getting under the cap. Colbert did not rule out the release of a few more players and the signing of a few more. He also said they still need to get some restructuring done and extensions are tough to do right now as the extended player would not be able to practice until Thursday if it was done before then. It sounds like you could hear more about these some time on Wednesday. Perhaps LaMarr Woodley will be one of them as he is the most logical right now. As far as Burress goes, the two sides have mutual interest in one another. The Steelers will be using the three $ 1 million credits available to them this year.

The Steelers got a full practice in today on the field turf after the rains on Friday. Still sidelined on Active PUP are Hines Ward, Chris Kemoeatu and Eugene Bright. Also all of the recently signed players can only watch and help coach and that was the case again today as Ward and Ike Taylor were seen giving the young players some pointers. Emmanuel Sanders also sat out today with discomfort in one of his surgically repaired feet.

Cornerbacks Keenan Lewis and Bryant McFadden were once again running with the first team with Taylor sidelined and Crezdon Butler worked as the first team nickel. Butler was beat on one play in particular by Arnaz Battle, but tipped the pass by Byron Leftwich that Da\’Mon Cromartie-Smith intercepted. Antonio Brown started opposite Mike Wallace with Ward and Sanders sidelined. Limas Sweed made a few nice catches as did rookie Wes Lyons and Tyler Grisham. Sweed ended the day with a hamstring problem and that is not what he needs. Cortez Allen received some instruction from Taylor throughout the day. Ben Roethlisberger needed to remind Brown where to line-up a few times. Wallace, Heath Miller and David Johnson had some good reps and Baron Batch had an easy drop of a pass that hit him in the hands. Miller was seen tutoring Wesyle Saunders a little. Rashard Mendenhall got into the act with a couple nice grabs out of the backfield. John Clay has good size and will be fun to watch in full-contact practices that start Sunday. Isaac Redman also got some third down work and made some catches. McFadden had good coverage on Wallace on a deep ball that fell incomplete, but Wallace made a tough catch over McFadden in team drills. Curtis Brown fell ill today.

Sunday will be the first full-contract practice of training camp and Tomlin was very excited about that. “It\’s football,” Tomlin said. “We\’re going to come out with pads on and we\’re going to play football.” You can watch the short post practice press conference on Steelers.com

Here is your motivational poster of the day! 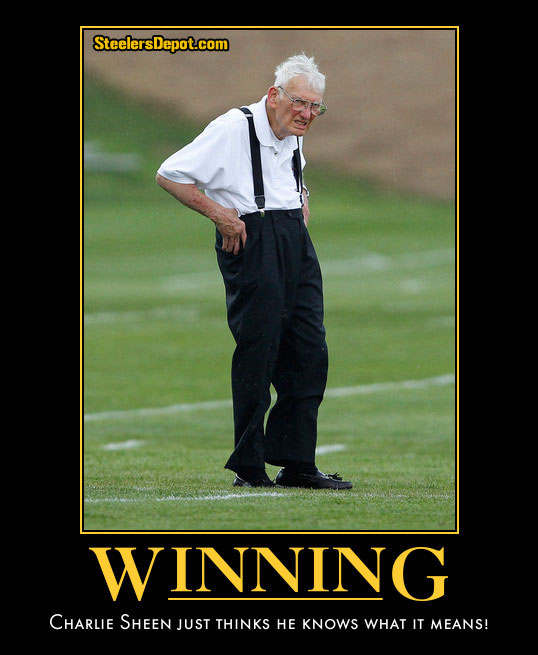