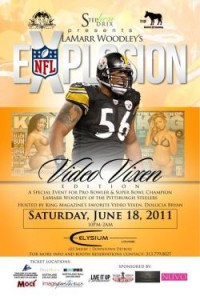 This Saturday, June 18th, the LaMarr Woodley Explosion looks like the place to be in Detroit, if you can get in that is. The event is billed as a “Star Studded Event”, with a confirmed A List guestlist. NFL Stars are reportedly flying in from all over the United States to support of Steelers linebacker LaMarr Woodley as he does his Annual Celebrity Weekend. Earlier that same day, Woodley will be hosting his fourth annual free football camp at the Saginaw High football field from 9 a.m. to 1 p.m. Saturday.

The night time fun will be held in downtown Detroit at the Elysium Lounge on Shelby St. and will be hosted by the favorite video vixen of King Magazine, Dollicia Bryan. (No relation to me lol)

Several NFL players will be in attendance after helping Woodley with his camp earlier in the day and they are: Marcus Demps, Leon Hall, David Harris, Mike Hart, Marshawn Lynch, Steve Breaston, Brandon Graham, Shawn Crable, Prescott Burgess and Morgan Trent. The party gets started at 10 p.m. with sounds provided by WJLB\’s DJ Polo.

The event is presented by: Big Three Entertainment, Stephen Hendrix Events and Ty of District 81 and for booth reservations and advanced ticket sales you can call (313) 779-0027.

Looks like a rocking time and I bet quarterbacks are not allowed in.