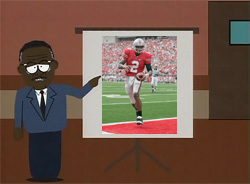 John Clayton speculated Wednesday on five teams that may take a chance on former Ohio State quarterback Terrelle Pryor, who decided earlier this week to enter the supplemental draft. Clayton list the Raiders, Dolphins, Ravens, Steelers and Redskins as the five teams that could possibly take a chance on him. Many are taking this speculation as fact that the Steelers have interest in Pryor and like I posted a short time ago, I still do not see it happening.

To recap my reasoning, the Steelers already have four quarterbacks scheduled to show up at Latrobe whenever training camp opens. Those four of course are Ben Roethlisberger, Byron Leftwich, Dennis Dixon and Charlie Batch. Dixon perhaps is the iffiest of the four as he received a one year tender from the Steelers as a restricted free agent. There is an outside chance another team could sign him whenever free agency opens, but it would cost them a fifth round pick should the Steelers choose not to match the offer.

For hypothetical sakes, let us pretend that indeed happens and Dixon is elsewhere when camp starts, that still leaves the Steelers with three experienced quarterbacks on the roster. There still would be no way that Pryor could compete with either Leftwich or Batch for the number 3 quarterback job and that is so obvious I hate even pointing it out. I should also point out he could not even compete with the under achieving Dixon either should he stay. Just stating more of the obvious here to everyone, just in case there is some confusion on that.

So where would Pryor fit on the roster? Wide receiver? There is no way the Steelers would burn a 53 man roster spot to carry a project wide receiver on a roster already full of talent. The cuts will be hard enough to make on the bottom of the receiver depth chart with Antwaan Randle El, Arnaz Battle and Limas Sweed all set to duke it out for the 5th and 6th spot. Carrying Pryor as a 7th would be reckless and irresponsible.

So what about as a gimmick player as some are suggesting? You mean for 3 trick plays a game in which he would have to be 1 of 45 active players on the gameday roster that very likely would not play special teams? Not happening as that once again is reckless and a waste of a roster spot. Even Stefan Logan was as surprising keep a few years back, but at least that was for his ability to return kicks and cover kicks, both abilities ended up being marginal at best and in reality it was a wasted roster spot in my opinion.

So what about as a practice squad player you ask? Are you really wanting to spend a 2012 draft pick on a player that you know would be headed straight to the practice squad? I didn\’t think so. Not even if he cost the Steelers a lowly 2012 7th round pick.

So how on earth does Clayton think the Steelers would even be a possible landing spot for Pryor? The only way I could fathom it is if the roster gets expended by 3 or more spots when a new labor agreement is reached and the Steelers then decided to try to grab Pryor in the 7th round of the supplemental draft, a draft they have never made a pick in since its creation in 1977. Odds of both of these scenarios happening are off the charts, just like the speculation made by Clayton.

I will end this post with a line from the episode of South Park that featured the Chewbacca Defense, “it does not make sense!”