Here we are two and half weeks away from the sound of helmets and shoulder pads hitting at Saint Vincent College in Latrobe and most of Steeler Nation is collectively freaking out over the LaMarr Woodley contract situation. ESPN North blogger James Walker reported on Monday that the Steelers will not extend Woodley prior to the start of the season and I myself have confirmed with LaMarr personally that there was nothing new as far as talks have gone. Now the Walker report might be true, but he truly is the only one reporting right now that it will not get done at all. Regardless if it does or doesn\’t get done prior to the start of the season, means absolutely nothing at this point and time and should not be regarded as the Steelers willingness not to keep him. 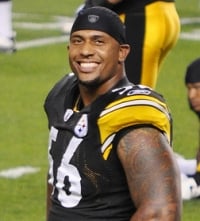 The Steelers and the Rooney’s have a method to their madness and it has been forged in steel and tradition over the years. They do not rush into anything and are fiscally responsible in not mortgaging the future years of the organization for just a few players. This is a business and a business of putting a team on the field year after year that has an opportunity to compete for a Lombardi Trophy. The offseason dealings with Woodley headed into the final year of his contract is no different. Adding to the uncertainty of the 2011 season, salary cap and future CBA is the constraints of the 30% rule they are up against in dealing with Woodley specifically. Woodley has certainly earned his rookie contract and then some to this point and is well deserving of a contract near or about that of the recent Patrick Willis contract signed with the 49ers. This new deal is tough to put together and likely will be around 6 years and almost 50 million dollars. The hanging point on this contract is the guaranteed monies and how it is structured using signing bonuses, superseded signing bonuses and completion bonuses. These things take time and you must be patient with that. Although the Rooney’s likely have a good idea of what a new CBA and salary cap might look like, it is in no way written in stone.

Woodley and his agent, Doug Hendrickson of Octagon Football, know how the Steelers work and even Woodley himself has said he will not pout or hold out this year. I have a feeling he has a wink and or a hand shake that he will get his. The Steelers will also likely have some sort of franchise tag they can use as well in a new CBA when the new fiscal year starts. Much like they did with nose tackle Casey Hampton this year, they can tag Woodley with the highest tag until a new deal is reached that fits both the club and Woodley\’s liking. Sure, Woodley could hold out if no new deal is reached by the start of camp in 2011, but that is a whole season and new CBA away right now. You couldn\’t blame Woodley at that point, especially if he puts up another stellar season in 2010.

The flip side no one really wants to think about right now as well is the notion of LaMarr getting injured. I hate to even bring it up, but in this game, every play could be your last. Imagine giving Woodley the moon right now with no notion of what a true new CBA will look like and that ending up costing the Steelers for several seasons down the road. I can almost guarantee that is in the back of their mind and I bet Woodley has a Lloyd\’s of London policy as well to protect against this. If not, he should.

If you have been a Steelers fan as long as I have, you know that the Rooney family will make all of this come together at the appropriate time. To think they will let a linebacker like LaMarr Woodley just walk away in the prime of his career is foolish. I know it, you know it and more importantly, LaMarr Woodley knows it. Fear not Steeler Nation!