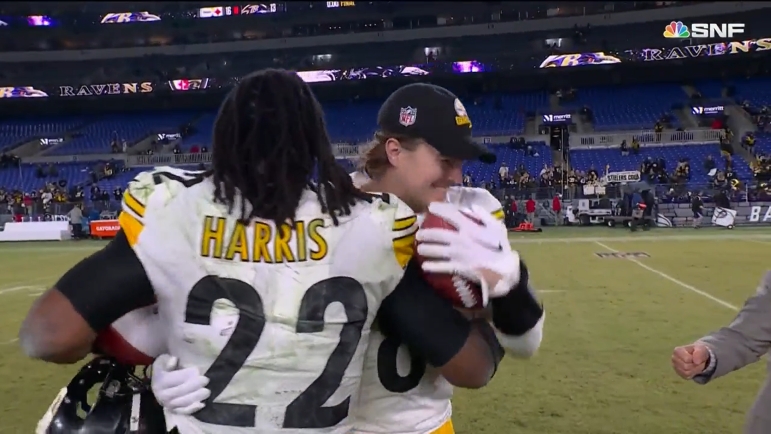 The Pittsburgh Steelers started the 2022 season off 2-6, and those outside the team had little to no hope they could be a possible playoff team. Inside the building though, the tough start may have helped bring the team together and help them recognize their flaws which allowed for such a dramatic turnaround in the second half of the season. Talking to reporters today, including TribLive’s Chris Adamski, Steelers running back Najee Harris detailed how the adversity early in the season helped make the Steelers a stronger team.

Harris said after the game on Sunday that things just weren’t clicking for the Steelers early in the season, but that they knew they had the general ideas and process down. Post-bye week, things started to click, and the Steelers became a whole new team. It’s clear that despite any outside negativity, the guys in the locker room knew what sort of team they had and were determined to figure out whatever was wrong.

Obviously, the building of team chemistry through the tough start to the season is key. Especially with such a young roster and guys not necessarily playing together for a long team, mainly on the offensive end, it’s important to build that chemistry and become a unit that wants to play for one another.

For the most part, the Steelers have always been that team, but with drastic changes coming into this year with former quarterback Ben Roethlisberger retiring and eventually being replaced by rookie Kenny Pickett, wide receiver JuJu Smith-Schuster leaving in free agency and changes along the offensive line, it may have taken longer than usual for guys to know how each other plays. Warming up and becoming more comfortable with the guys next to you can only be a positive thing, and it seems that’s happened more and more for the Steelers as each week passes.

While the turnaround has been remarkable, the job isn’t finished. The Steelers want to make the playoffs and to do that they’ll need to take care of business against the Cleveland Browns on Sunday afternoon. They’ll need help too, but all they can control is beating Cleveland and finishing the year with a winning record, something that seemed unfathomable after their 2-6 start.