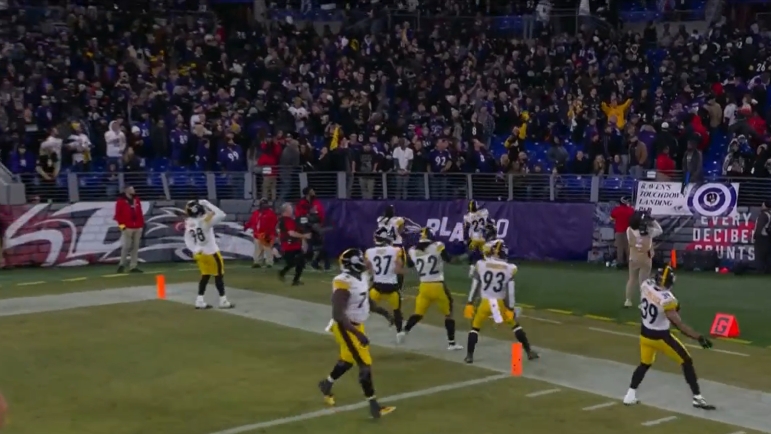 During the Pittsburgh Steelers Week 9 bye week, their hopes for the season looked bleak. The team was sitting at 2-6, playing in one of the toughest divisions in football, and facing the prospect of four more divisional games the rest of the season. While the Steelers have played three of those divisional games and gone 1-2, the team’s losses to the Cincinnati Bengals in Week 11 and the Baltimore Ravens in Week 14 are their only two losses post-bye. During his press conference today, offensive coordinator Matt Canada talked about what went down during the bye week that led to the improvement we’ve seen since.

“We obviously talked about a lot of things. The accountability level was raised a little bit. There are no excuses in life,” Canada said via official transcript provided by the team. “You either get it done or you don’t. You’re young, you’re this, you’re that, and I think there was an accountability element that was brought by the players to each other that, as we all sat and talked, we
needed to find a way to pull the thumb and get a little bit better.”

Canada added that while the coaching staff thought the bye was productive, all that matters now is that the improvement has shown up on the field.

“But there were some really good meetings and things we did that we feel like obviously made a difference and it showed up statistically, but all that matters is it’s showed up in wins. Two of them, we didn’t get it done and those are always hard, but the other ones we’ve played well and happy for our guys that were able to do that.”

Canada isn’t the only person around the team who’s credited the bye week for being hugely important for the Steelers. Yesterday, center Mason Cole said the bye week was the most productive he’s ever had. Quarterback Kenny Pickett said that the work he put in during the bye helped allow the game slow down for him in ensuing weeks, and Pickett has shown that by leading back-to-back game-winning drives in must-win games for the Steelers.

After the game on Sunday, starting running back Najee Harris, who crossed the 100-yard threshold for the first time this year, also talked about how the bye week helped the team get back on track.

“Earlier in the season, we didn’t really click right. There was times where we off by this pass, or off by this block, this cut, this this this. We really came together after this bye week and was able to come together and make the most of it,” Harris said via the team’s YouTube channel.

Bye weeks are crucial in the NFL for resting and resetting and giving a player’s body a break for a week over the course of a long NFL season. But with all the downtime, there’s a lot of thinking and meetings and coaching and preparing that happens that can help something spark within a player or team. For the Steelers, that’s what happened across the board. The defense has been better, quarterback play has been better, the offensive line and the run game has been better. It’s clear as day to anyone watching the Steelers over the last few weeks that they’re a much, much better team now than they were just ten weeks ago.

Good teams should get better over the course of a season. It’s not a surprise to see Pittsburgh improve. But the level to which they’ve improved, to now being in the thick of the playoff race, is incredibly impressive and really speaks to the work the team and coaching staff has put in. And for so many players and coaches to speak about the bye week in particular, now being well over a month removed from it, really tells you how important it was for the 2022 Steelers. It helped this team develop into a legitimate threat and a team that just simply wins games.

For Canada to speak about the accountability that the players brought upon each also shows the leadership that this team has beyond the coaching staff. With veterans like Cameron Heyward, T.J. Watt, and Minkah Fitzpatrick, the team has clear leaders, especially on the defensive side of the ball. Harris was named a captain this year despite it being just his second year in the league, and his leadership has routinely been praised. For the team to take stock of where they were at and challenge each other to be better and step up has been huge. Particularly on offense, Harris, and Pickett have stepped up in a big way post-bye, and the offensive line has taken massive strides throughout the season, particularly in the run game.

When you write the story of the 2022 Pittsburgh Steelers, whether or not they make the playoffs, the Week 9 bye is a crucial part of the story. Whatever happened inside and outside the team facility that week clearly made this a better team and a team that has a chance to make history as the first team to make the playoffs after starting 2-6 that didn’t win their division.