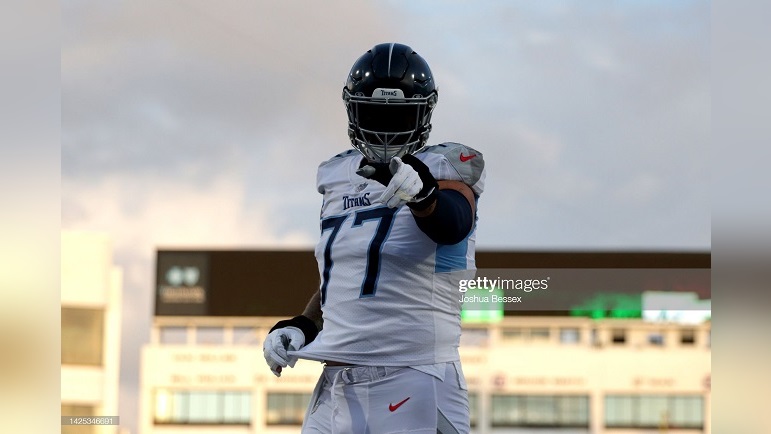 How many of you are already dreaming about current Tennessee Titans tackle Taylor Lewan donning the black and gold in 2023? Well, I think we know that Jersey Jerry from Barstool Sports certainly is. In fact, he recently tweeted out one of those jersey swap edits that has Lewan decked out in the black and gold. Even more interesting than that is the fact that it elicited a reply on Twitter from Lewan.

Those colors so go hard. https://t.co/KTtcnznA3L

Now, before we go any further, let it be known that Lewan is currently under contract with the Titans for the 2023 season with a base salary of $14.841 million. However, with Lewan having suffered two torn ACLs in the last three seasons, it’s quite plausible that the Titans might terminate his contract ahead of the new league year getting underway in March. Lewan even predicted as much in a recent interview he did with Kay Adams on her show.

“I think if you were to say ‘what happens with Taylor Lewan with the Tennessee Titans after this season ends?’ You would likely assume I’m released from the team, probably February or March,” Lewan told Adams.

“That is something that, you play in this game long enough, you see how the dominos fall. Like I said, two ACLs in three years, it’s hard for people to wrap their minds around keeping me in the building. I’ve been fortunate to be a part of this team for nine years and see 100 percent turnover of this team. That’s something that I hold precious to myself and take a lot of pride in, being the longest-tenured Titan here.”

“If you were to say ‘what happens to Taylor Lewan with the Tennessee Titans after the season ends?’ You would likely assume that I am released from the team…”@TaylorLewan77 on how the firing of GM Jon Robinson affects his future with the Titans⁰⁰📺: @FanDuelTV | @heykayadams pic.twitter.com/TKqlqBpW4a

So, does Lewan have a great feel for what the immediate future holds for him when it comes to the next two months? I certainly think so. In fact, I will be shocked if he’s not cut.

So, could the Steelers be a potential suitor for Lewan if the Titans do indeed terminate his contract before March 15th? While I’ve learned to say that nothing is really impossible when it comes to the signings of NFL free agents, it is important to get out some more facts when it comes to Lewan.

For starters, he will turn 32 in July and that’s usually past the age range that the Steelers gravitate to when it comes to free agents. Also, and as previously mentioned, he is coming off two season-ending knee injuries in three years with his most recent one happening early in the 2022 season.

What kind of money would Lewan be looking for in 2022 if the Titans do indeed part ways with him? If I had to guess, probably a little more than what the Steelers would be willing to pay.

Something else to keep in mind is the fact that the 2023 free agent tackle group doesn’t look all that great as we sit here in the middle January. It’s pretty much Orlando Brown and Mike McGlinchey and then a long list of others that aren’t all that attractive overall. In short, Lewan, if fully healthy come March 15, might become an attractive free agent tackle option for quite a few teams, depending on what he’s looking for contract wise.

In closing, I’m not shocked at all that Lewan commented on the recent tweet that featured him in a Steelers’ uniform. He wants it to be known that he thinks he’ll be available soon and that the Steelers are a team he wouldn’t mind playing for in 2023. It’s a smart move by him this early in the offseason.

If I had to guess right now, Lewan will play for a new team in 2023 but that team won’t be the Steelers. Stranger things have happened, however, and the Steelers certainly could make an addition of Lewan work should they really want him in the fold this offseason.