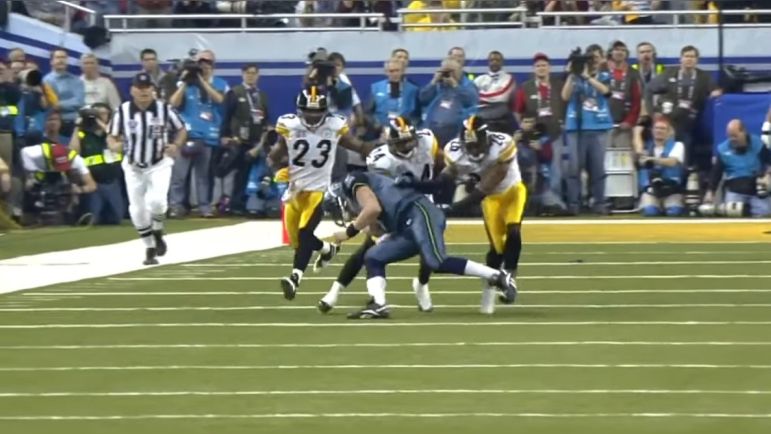 Seattle Seahawks’ fans still can’t stop talking about the refs in Super Bowl 40. In another 30 years, they’ll still be complaining about the calls that didn’t go their way. Bleacher Report listed the six most controversial playoff moments since 2000 and named the refs’ calls, or non-calls, in Super Bowl XL between the Pittsburgh Steelers and Seahawks as the third-most debated moment(s).

In all likelihood, he’s pointing to flagging Seahawks quarterback Matt Hasselbeck for a low block when he made a tackle after throwing an interception. Another top possibility is a holding call on Seattle lineman Sean Locklear that negated an 18-yard catch despite Pittsburgh’s Clark Haggans seemingly being offside.

Seattle fans could also mention an offensive pass interference call on Darrell Jackson, negating a touchdown. That moment is at least debatable, although it’s fair to classify the flag as a soft penalty.”

Kenyon is referring to an ESPN article written in 2010 about the game in which Leavy said he had “sleepless nights” over – in his view – missing calls late in the game. Still, the league would go on to say they felt the game was “well-officiated” overall.

As Kenyon notes, one of the most impactful ones was a holding call on offensive lineman Sean Locklear. Here’s the context. Fourth quarter, 12:35 to go, Pittsburgh’s leading 14-10, and Seattle has the ball at the Steeles’ 19. Quarterback Matt Hasselbeck connects with TE Jeremy Stevens over the middle for an 18-yard gain down to the Steelers’ one-yard line. But the refs flag Locklear for holding, turning a 1st and goal into 1st and 20. Here’s a look at the call.

On the broadcast, color commentator John Madden immediately disagreed with the penalty, noting he “didn’t see holding.” And that’s probably a fair assessment, it’s a close call. Kenyon notes Haggans may have been offsides here and while that’s close, it looks like he times the snap count just right.

Regardless, the penalty backed Seattle up into 1st and forever. On the next play, NT Casey Hampton sacked Hasselbeck for a five-yard loss. Two plays later, Hasselbeck is picked off by CB Ike Taylor with Hasselbeck being flagged for an illegal low block, giving Pittsburgh prime field position. Four plays later, the Steelers call the play of the night, WR Antwaan Randle El hitting Hines Ward for a 43-yard touchdown, completely swinging momentum and changing the game.

The penalty on Hasselbeck might have been the most questionable call of them all. Clearly trying to tackle Ike Taylor, he was flagged as if he was blocking. Here’s a look at that one.

Still, that call wouldn’t have wiped out the interception. Taylor still picks it off, the Steelers still have the ball.

The pass interference call isn’t all that controversial. You can check it out here and see WR Darrell Jackson clearly push off on S Chris Hope. An easy decision for the refs.

Those fourth quarter calls are certainly debatable. But it’s easy to complain about refs in games you lost instead of all the controllable things that went wrong. Seattle’s stellar run game stalled out against Pittsburgh while Hasselbeck was sacked three times and the Seahawks went an ugly 5-17 on third down. The refs aren’t responsible for the Seattle secondary being fooled by Pittsburgh’s trickery or for allowing Willie Parker to have a big lane on his 75-yard touchdown run.

At this point, the Super Bowl was nearly 20 years ago. It’s time to turn the page. Steelers’ fans have. Seahawks’ fans probably won’t.

Other notable calls on this list include the Tom Brady “tuck rule” game, the Dez Bryant catch/no-catch, the entire Deflategate saga, and the non-PI call in the 2018 NFC Championship game.