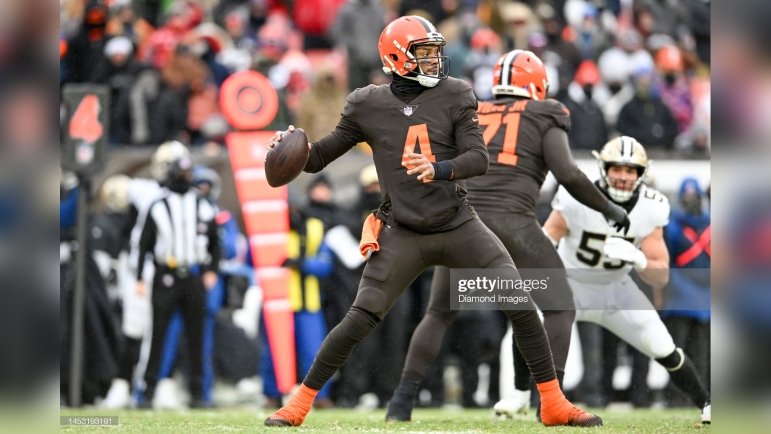 It’s not often that you face a division rival’s new franchise quarterback for the first time in Week 18. That’s what the Pittsburgh Steelers will be tasked with on Sunday, however, as they face the Cleveland Browns in a must-win game.

Cleveland acquired quarterback Deshaun Watson via trade this offseason, paying a king’s ransom for a man who over the past couple of years has behaved and performed at a level much below that. He spent the first 11 games of the season serving a suspension due to findings regarding sexual misconduct with numerous massage therapists.

That’s the reason Pittsburgh faced Jacoby Brissett back in Week 3, and why this is new to them now, as if anybody forgot. But regardless of the why, it’s the fact of the matter and something the Steelers and head coach Mike Tomlin have to contend with going into this game.

“Obviously, stepping into a stadium with Deshaun Watson has our attention, what he brings and getting a feel for him”, Tomlin said yesterday via the team’s website. “We don’t have a lot of exposure to him, obviously. The first in-stadium exposure is going to be a significant one for us and understanding how to manage his talents and what it means in terms of how these two groups come together. His mobility, his ability to extend plays and make throws”.

A former first-round draft pick and three-time Pro Bowler for the Houston Texans, Watson did not play at all last season after requesting a trade, even before the accusations of sexual misconduct came to light. When he finally stepped on the field earlier this season, he looked like a guy who hadn’t played in nearly two years.

He did throw three touchdown passes on Sunday, however, in a win over the Washington Commanders. The Browns are 3-2 with him as the starter now, though this is the first of those games in which he really looked even halfway decent for even a half of football. But they’ve kept everything else intact around him, allowing for the easy transition.

“Schematically, I don’t see a lot of changes in what it is that they do”, Tomlin said. “I’ve known Kevin [Stefanski] for a long time and he’s got an approach to ball that’s tried and tested. He’s been trained by quality people. He’s from that Andy Reid tree, if you will, and so I know he has an agenda and a plan in which he likes to attack the schematic component of the game”.

The offense has been run the same all season whether it’s been Brissett or Watson at quarterback. Having a dynamic running game helps you do that a lot, and the offense still works through Nick Chubb and Kareem Hunt.

Even outside linebacker Alex Highsmith earlier this week acknowledged that he was more focused on doing a better job stopping the run this time around than he was on preparing to face a new quarterback. But he’s still a talented player, so it’s not as though they can just ignore him, either.