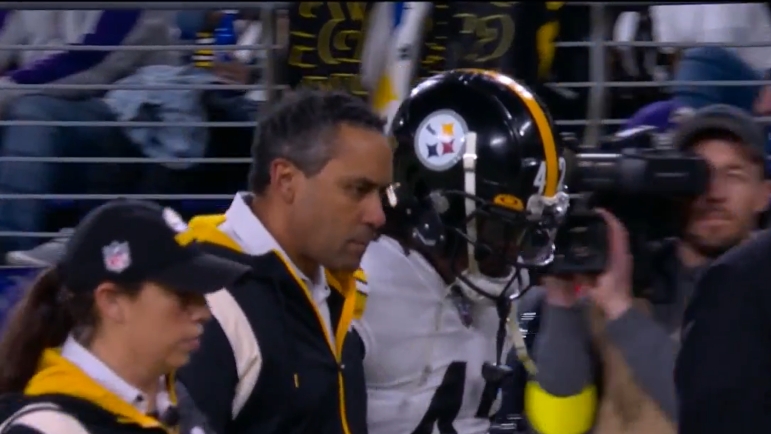 UPDATE: Johnson has returned to the game.

WR Diontae Johnson appeared to suffer a lower-body injury after a third down conversion to RB Jaylen Warren. Johnson was hobbling after the play and went to the ground before he made the sideline and was tended to by trainers on the field. Johnson has 82 receptions for 809 yards this year, and the Steelers receiving corps behind him and George Pickens is thin with WRs Steven Sims and Gunner Olszewski playing in the slot. Miles Boykin is also an option to replace Johnson if he misses time.

UPDATE: Pierre is being evaluated for a head injury, per the team. His return is questionable.

Pittsburgh Steelers cornerback James Pierre was seen on the broadcast walking off the field with trainers after a 2nd and 8 incompletion by the Ravens with 1:48 remaining in the first quarter. Pierre didn’t appear to be walking gingerly, but he was accompanied by two trainers and appeared to be heading to the locker room. Pierre has played a bit role in recent weeks as the Steelers’ outside cornerback, but he adds valuable depth at the position. We will keep you updated on any change in Pierre’s status.

UPDATE (9:56 PM): Pierre has been ruled out with a concussion.

CB James Pierre has been ruled OUT for the remainder of today’s game (concussion).

FS Minkah Fitzpatrick was injured on the opening drive of the second half. It was a serious-looking injury with players taking a knee around him. However, he was able to walk off under his own power. Damontae Kazee has replaced him.

LB Myles Jack has been ruled out with a groin injury. Devin Bush will see an increase in snaps.

LB Myles Jack has been ruled OUT for the remainder of tonight's game (groin).