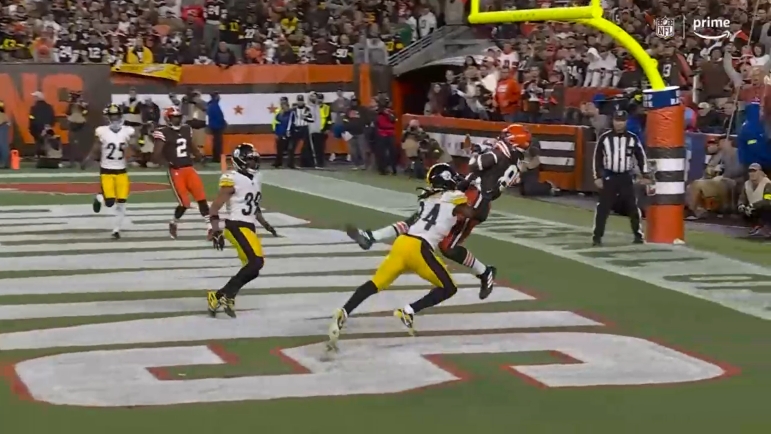 For the fourth time in the past five seasons, the Pittsburgh Steelers are entering the season finale with their playoff hopes dependent on other games. That said, the team’s focus is undoubtedly on beating the Cleveland Browns, who beat them in Week 3 and are no pushovers. This time around, the Steelers will be at home, and the Browns will start Deshaun Watson instead of Jacoby Brissett. As such, here are five numbers to look for in the team’s season finale.

50.2. According to rbsdm.com, the Steelers have a 50.2% success rate on run plays since Week 10, which ranks second place in the league and only behind the Philadelphia Eagles. Meanwhile, the Browns have allowed a 44.0% run success rate defensively on the season, which ranks 26th in the league. Therefore, expect another run-heavy game for Pittsburgh.

89. The last time the Steelers played the Browns, tight end David Njoku got 89 yards, which remains his season-high. According to PFF, linebacker Devin Bush allowed 33 of those yards on three catches, more than anyone else on the Steelers. The Browns will have a mismatch in coverage with Njoku, especially given that the Steelers allowed Ravens’ tight end Mark Andrews a 100-yard game. Look for the Steelers to make adjustments to avoid having mismatches for Watson and company to exploit.

68.1. Quarterbacks vary in how they play against the blitz. For Watson, who has only started five games, he plays far better when the defense sends extra men. Indeed, according to PFF’s premium stats, Watson is blitzed on 22.1% of his dropbacks, and has thrown two touchdowns and no interceptions as well as a 118.5 passer rating on said dropbacks. On the other 77.9% of his dropbacks when he is not blitzed, his play drops significantly, as he has a stat line of three touchdowns, three interceptions, and a bottom-tier 68.1 passer rating when the defense stays back. Needless to say, the Steelers must be able to apply pressure with four or fewer pass rushers.

3. A big part of the Steelers’ 6-2 record since the bye week is their improvement in key situations, particularly on third down. They have converted 53.6% of their third downs since Week 10, which ranks second in the league. On defense, they’ve allowed a 35.4% third down conversion rate, which ranks ninth in the league in that same span.

27. Perhaps the most important number for the Steelers, 538 gives them a 27% chance to make the playoffs. Aside from needing to beat Cleveland, the Steelers need the Buffalo Bills to beat the New England Patriots, and the New York Jets to beat the Miami Dolphins. For yet another season, Steelers Nation will be watching multiple games during the season finale.