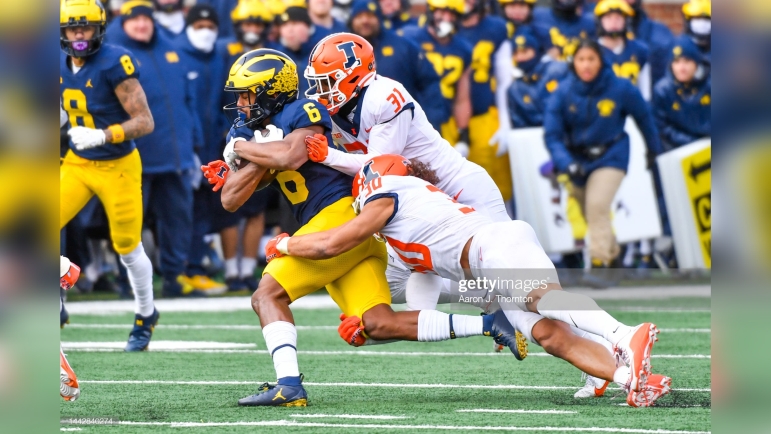 It’s nice to see a mock draft that points the Pittsburgh Steelers in a different direction. If for nothing else, it gives us something else to write about. While many mocks understandably focus on Pittsburgh beefing up the trenches, Pro Football Network’s latest edition has the team prioritizing the secondary instead. Author Ian Cummings has the Steelers taking Illinois CB Devon Witherspoon with the 16th pick of his latest mock. Explaining the pick, Cummings writes:

“The cornerback room was an area of concern entering the 2022 season for Pittsburgh, and it remains such as we enter 2023. The Steelers aren’t necessarily lacking natural talent, but they don’t have the desired reliability and consistency from their DBs. Devon Witherspoon can help with that. Not only is he incredibly twitchy and agile in short areas, but he’s also instinctive, disciplined, aggressive, and a constant playmaker in both phases.”

Witherspoon is coming off a big year for a resurgent Illinois team, picking off three passes and doing damage after the play with 97 return yards. A well-rounded player with 41 tackles (2.5 for a loss) with 14 pass deflections, he’s one of many corners vying for Top-20 contention.

A redshirt junior who declared for the draft two weeks ago, Witherspoon has 157 career tackles with five interceptions and a forced fumble. Those will be his final career statistics, opting out of the team’s Monday bowl game against Mississippi State. Pittsburgh’s generally gone against drafting bowl opt-outs since that’s become popular though with a new regime in Omar Khan and Andy Weidl, there’s no guarantee that pattern will continue, especially as the number of players who skip increase.

Our Jonathan Heitritter wrote up a recent scouting spotlight on Witherspoon, concluding:

“He has some of the best coverage metrics in college football and provided another example of the challenge he can be for opposing passing games in this game against Northwestern. Still, Witherspoon isn’t without his warts as he can be more consistent as a tackler in terms of technique as well as desire to get his nose dirty and avoid making business decisions when he has teammates there to do the dirty work for him.”

With a longer and wirer frame, he sounds a bit like another Witherspoon currently on the Steelers’ roster, Ahkello Witherspoon. A height/speed player who lacks top-end physicality but makes up for it, at his best, with the ability to cover. Of course, Ahkello Witherspoon has had a terrible year in Pittsburgh and his career has never found consistency. Hopefully Devon can avoid the same fate.

The Steelers’ cornerback room has little guarantees for 2023. Levi Wallace is under contract and will return, playing better the second half of the season. From there, things get murky. Ahkello Witherspoon is a possible cut candidate, William Jackson won’t be retained at his inflated 2023 base salary while Cam Sutton is a free agent. The team will likely want to re-sign him but will have to pay dearly to do so and there’s no guarantee they’ll agree to terms. Sutton knows as well as anyone how much free agent corners can command. Even if Sutton is brought back, the team will lack a true #1 cover corner making someone like Devon Witherspoon attractive.

While they’re likely to build the team inside-out and focus on the trenches, picking in the middle of the draft means the top linemen are going to be off the board. That could push the team into other directions like corner.

We’ll have a full scouting report on Witherspoon sometime during the offseason. In PFN’s mock, they project Kentucky QB Will Levis to go #1 to the Houston Texans, a surprising selection of Alabama’s Bryce Young or Ohio State’s C.J. Stroud. In fact, Florida’s Anthony Richardson also slides in ahead of those two, banking on traits and upside over refinement.