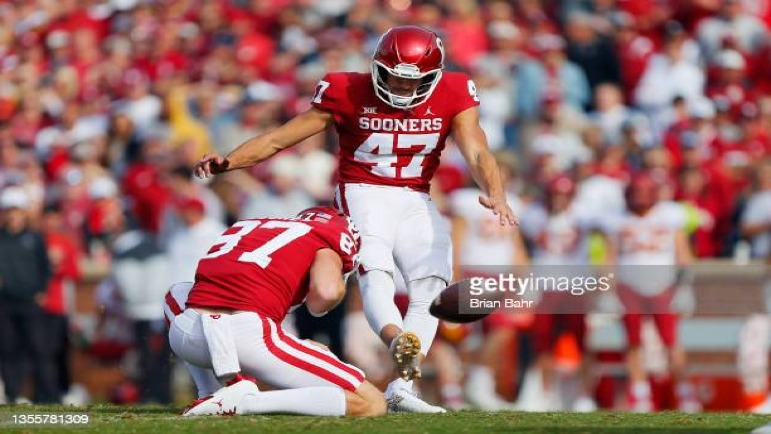 The Pittsburgh Steelers may be looking for some off-season competition for kicker Chris Boswell and punter Pressley Harvin III, as the Steelers worked out four special teamers today. Kickers Gabe Brkic and Chris Naggar along with punters Joseph Charlton and Dom Maggio worked out for Pittsburgh today. The news was reported by Aaron Wilson of Pro Football Network via the NFL Transaction Log.

Brkic joined the Minnesota Vikings as an undrafted free agent out of Oklahoma, where he made 57 of 69 field goals during his college career. He made the All-Big 12 team as a redshirt sophomore, and in 2021 was a Lou Groza award finalist for the best collegiate kicker. He made five kicks over 50 yards that year.

Naggar was signed by the Jets as an undrafted free agent in 2021 after a college career at Texas and SMU. He does have NFL experience, as he kicked for the Cleveland Browns on Christmas Day 2021 against the Green Bay Packers. Nagger made a 37-yard try and went 1-2 on extra points. He started his college career as a punter but he switched to kicker in his final collegiate season, leading the AAC in accuracy.

Charlton has the most NFL experience and won NFC Special Teams Player of the Week after pinning six punts inside the 20-yard line against the then-Washington Football Team as a member of the Carolina Panthers in Week 16 of the 2020 season. He spent all of 2020 as the Panthers’ primary punter, averaging 46.3 yards per punt. He spent time with Carolina and the Jacksonville Jaguars in 2021, punting in 6 games and averaging 40.5 yards per punt.

Maggio has never punted in an NFL game after a college career at Wake Forest. He spent time on the practice squad of the Atlanta Falcons and was signed to a futures deal, but was waived last June. He originally signed with the Baltimore Ravens as an undrafted free agent in 2020 after averaging 43.7 yards per punt in college.

If the Steelers bring one of these guys in, it’ll be in the form of a reserve/future contract. It remains to be seen if the Steelers will bring in more specialists for workouts in the coming days/weeks.