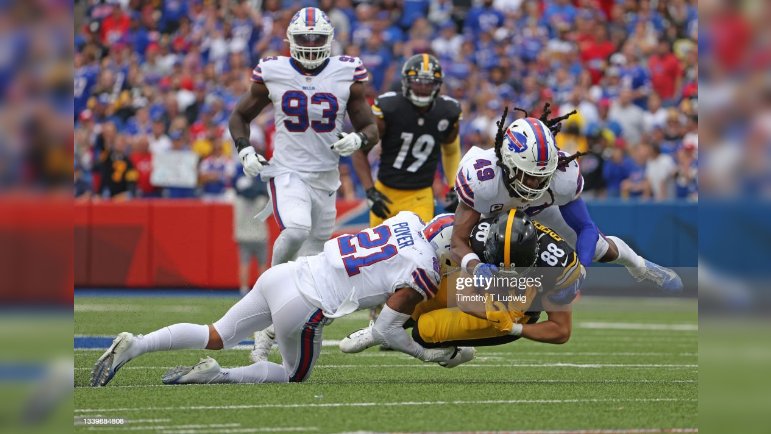 It’s tough to see the Pittsburgh Steelers sitting at home as the AFC Wild Card round kicks off Saturday, especially after the way they closed the second half of the season on a 7-2 run.

Still, though they are sitting at home, they’ll get a jump on the evaluation process of not only players on their own roster, but players on teams in the playoffs that are set to hit free agency and could be in their sights ahead of the offseason.

One such player is Buffalo Bills star linebacker Tremaine Edmunds, the younger brother of Steelers safety Terrell Edmunds. Tremaine is set to hit free agency after five seasons in Buffalo. In the regular season, Tremaine finished with 102 tackles for the AFC East champion Bills, and has recorded 565 career takes, 32 tackles for loss, 6.5 sacks, 18 quarterback hits, 35 pass breakups, five interceptions and two forced fumbles in his career.

Tremaine Edmunds obliterates this run. He plays through the fullback, knocks him backwards, and makes the tackle at the line of scrimmage. Fast, physical, violent, & beautiful#Bills #BillsMafia #GoBills

Still just 24 years old, Edmunds will be a hot commodity once he hits free agency — assuming the Bills let him enter the open market. That is looking more and more like a real possibility after Buffalo paid All-Pro linebacker Matt Milano a hefty extension earlier this season and are already tight up against the cap.

That’s where a team like the Steelers could come into play. Already in need of a serious upgrade at inside linebacker after failing plug the hole left behind by Ryan Shazier’s tragic injury in 2017 with the likes of Devin Bush, Myles Jack, Joe Schobert and Avery Williamson in recent seasons, Edmunds could be the latest target for the Steelers.

Add in the fact that his older brother, Terrell, is already here and the franchise loves those family connections, it could be a fit in free agency.

It’s easy to see why Bleacher Report listed the Steelers as the top potential suitor for Edmunds’ services Saturday, right alongside the New York Giants. Of course, the Giants’ head coach is Brian Daboll, who was the offensive coordinator in Buffalo for a few years while Edmunds was staring defensively.

That said, there’s nothing like the strong family bond, which could pull Edmunds to Pittsburgh to be with Terrell. The two played at Virginia Tech together and could be on the same defense again in the Steel City, assuming Terrell — an unrestricted free agent again – signs back with the Steelers this offseason after a strong 2022 campaign.

Terrell Edmunds spoke to the media about free agency, the defense + more. pic.twitter.com/jPvYsftLmj

Terrell already joked that he’d convince Tremaine to sign with the Steelers in a package deal to keep his parents in one location every Sunday during football season.

While Tremaine will demand a pretty penny in free agency, the Steelers will have the cap space to pursue the young, Pro Bowl caliber linebacker checks a lot of the boxes that the Steelers look for with size, athleticism, and obvious first-round pedigree.

With Bush, Robert Spillane and Marcus Allen all set to hit free agency at the inside linebacker position, leaving only Myles Jack, Tae Crowder and Mark Robinson as the only inside linebackers on the roster, the Steelers will be in the market.

Tremaine’s athleticism allows the Bills to defend the middle of the field.

Tremaine seems like the most logical target right now, especially when dot connecting. The Steelers were at his and Terrell’s Pro Day at Virginia Tech in 2018, with head coach Mike Tomlin and ILBs coach Jerry Olsavsky in attendance. Add in the NFL bloodlines with Terrell and former Steelers running back Trey, as well as their father in former NFL tight end Ferrell, a lot of the dots from a Steelers standpoint add up, as far as interest goes.

We’ll see if the Steelers show real interest and make a move to get Tremaine onto the roster to plug the ILB hole. It makes a lot of sense any wha you look at it.