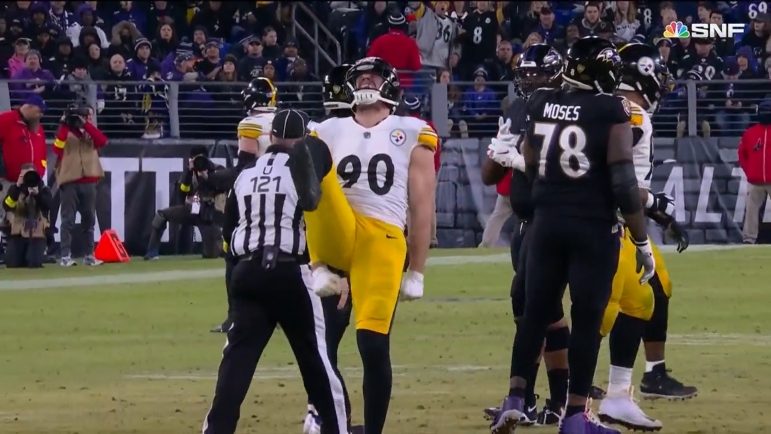 New year. Same weird. Though nothing can top the weird of the Pittsburgh Steelers being right back in the playoff race.

– Even with Kenny Pickett’s heroics, let’s start with the ground game. Pittsburgh ran for 198 yards against the Ravens, the most versus Baltimore since Week 6 of the 1997 season when Pittsburgh won in a 42-34 shootout. That day, they ran for 214 yards. Jerome Bettis went for 137 while Kordell Stewart had 78, 74 on this incredible play alone. Long time coming for this ground attack.

– Harris recorded his first 100-yard rushing game of the season. His last came on January 3rd of 2022, meaning he went 363 days between outings.

– In Ravens’ history, which I know isn’t super long but still pretty long, this is just the 13th time Baltimore’s allowed 190+ yards rushing to an opposing team. The last time they allowed 198+ like Pittsburgh did to them tonight was in 2017 to the Chicago Bears. And that was an OT game. That last time it happened in regulation was 2013, a decade ago, when they allowed 203 yards to the Buffalo Bills.

– Across his two game-winning drives the last two weeks, Kenny Pickett has completed 12/15 passes for 139 yards and two touchdowns, a 144.9 QB rating.

– Minkah Fitzpatrick has six interceptions this season, a career-high for him. He’s the first Steeler since Troy Polamalu in 2010 to have six in a season. Polamalu (who did it twice) and Fitzpatrick are the only Steelers since 1997 to have six picks in a season for Pittsburgh.

– Six receivers caught a pass tonight. They all caught two or three. No one had more than three, no one had just one. TE Pat Freiermuth, RB Jaylen Warren, and WR Steven Sims all led the way with three.

– T.J. Watt picked up another sack tonight, giving him 77 for his career. He now has one more through six seasons than big brother J.J. Watt did.

T.J. Watt has now tied Derrick Thomas for the sixth-most sacks through a player’s first six seasons, passing up J.J. and Bruce Smith with his sack Sunday night. Since sacks became official in 1982, the only two players who have more are Reggie White and Demarcus Ware.

– Over the last four second halves of games, so the eight quarters, the Steelers have given up just 15 second-half points. Remarkable. Just three to Baltimore Sunday while they pitched a shutout against Las Vegas.