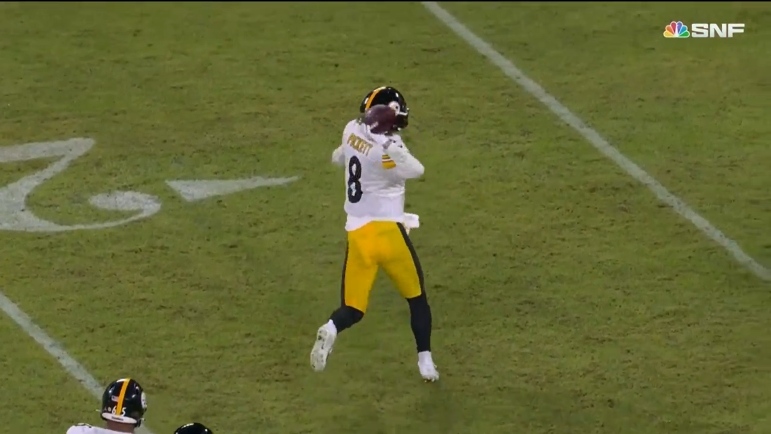 Kenny Pickett is coming off his best game as a pro. In primetime, Pickett orchestrated an eleven-play, 80-yard touchdown drive to give the Pittsburgh Steelers a much-needed win over their hated rivals, the Baltimore Ravens, to keep their playoff hopes alive.

Due to his incredible performance, Pickett has been receiving praise from all over the sports world. One person, in particular, Bucky Brooks of Fox Sports, went as far as to say that Pickett was Week 17’s “M.V.P.”

“It is time to give Kenny Pickett some credit for his late-game heroics for the Steelers,” wrote Brooks. “The rookie gunslinger has directed game-winning drives in back-to-back weeks to keep the team’s playoff hopes afloat. Moreover, Pickett has shown glimpses of being the franchise quarterback capable of leading Mike Tomlin’s squad back to prominence.”

Pickett’s comeback on Sunday night was his second in a row, but this one was much more impressive. On the drive, Pickett completed five of six passes, including the game-winning touchdown. Overall, Pickett had a really good outing, completing 15/27 passes for 168 yards and a QBR of 79.6, the highest of his career.

Pickett’s best play came on the final drive, and it was not the game-winning touchdown pass. After a huge first down conversion on a pass to tight end Pat Freiermuth, Pickett threw a dart to slot receiver Steven Sims to pick up 28 yards in a window that was about the size of a grain of sand.

Here is a behind-the-QB view of that pass to Sims from Pickett: #Steelers #NFL pic.twitter.com/O0s93nGnYV https://t.co/umZxzaWECY

Pickett still has a lot of areas to improve in. He has to get better in the red zone, and he has to stop leaving clean pockets are two in particular. However, the improvement we have seen already this season is super encouraging. His performance Sunday night against Baltimore hopefully becomes the norm as he tries to become Pittsburgh’s next franchise quarterback.