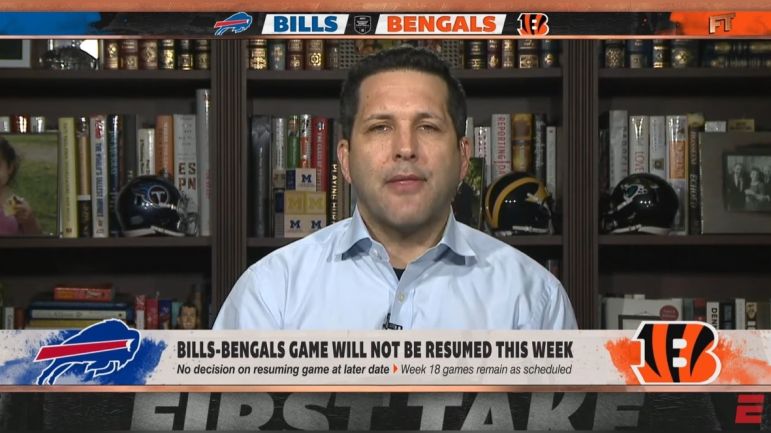 With the continued encouraging news on Buffalo Bills’ safety Damar Hamlin, the NFL is beginning to think about the future of its schedule. While Hamlin’s health is still the primary focus, the league has a job to do mapping out the rest of the season.

While nothing’s been official, ESPN’s Adam Schefter provided some clues on what the league could do moving forward. He says it’s unlikely the Bills/Bengals game will be resumed and be declared something akin to a no-contest (or potentially a tie, it’s unclear which specific classification the league would give it).

Adam Schefter thinks the NFL will not look to resume Bengals vs Bill game & that they might be working towards either a potential neutral AFCG site or top seed choosing between having bye or home field with the No.2 seed getting whatever is not not picked. pic.twitter.com/rEINnet2aJ

It would be an unprecedented moment in NFL history, essentially cancelling a game. But these are unprecedented circumstances and the NFL nullifying the game is the best decision for all parties. To not make the Bills and Bengals take the field in Cincinnati again and relive the moment where a player died on the field, only brought back to life by the quick response of medical personnel, chiefly Bills’ assistant athletic trainer Denny Kellington. Cancelling the game also provides the least amount of disruption to the rest of the schedule; the league has already confirmed the Week 18 schedule is locked in as-is, meaning a Bills/Bengals makeup date would have to take place when the playoffs are scheduled.

Beyond that, the NFL has to decide how to handle playoff seeding. According to Schefter, this is one idea the league is considering.

“You call the Bengals-Bills a tie. The number one seed gets the choice of home field throughout the playoffs or the bye. The number two seed gets whatever isn’t chosen.”

If the Kansas City Chiefs were to be the AFC’s #1 seed after Sunday, they would get to choose to either take the bye or play on Wild Card weekend and have home field advantage throughout the entire playoffs. The #2 seed gets whatever the Chiefs don’t pick. It would seem more likely a team would choose the bye over home field but it would be up to the #1 seed.

Schefter also says in the event of an AFC Championship game against two teams who have played an unequal number of games, says the Chiefs versus Bills, the game could be played at a neutral site.

Again, all of these are ideas and obviously, some of them conflict with each other. The league has not made an official announcement and it’s unclear when they will come to some finality. With the Week 18 schedule locked in and if the league has a good feeling it won’t resume the Bills/Bengals game, they have a little bit of time to figure everything out.

For Steelers’ fans, their playoff path isn’t impacted. The Bills will play the New England Patriots this Sunday at 1 PM/EST, just as the Steelers will do against the Cleveland Browns and the Miami Dolphins will versus the New York Jets. For Pittsburgh to become the 7th seed, they’ll need to beat the Browns and have the Dolphins and Patriots not win their games.