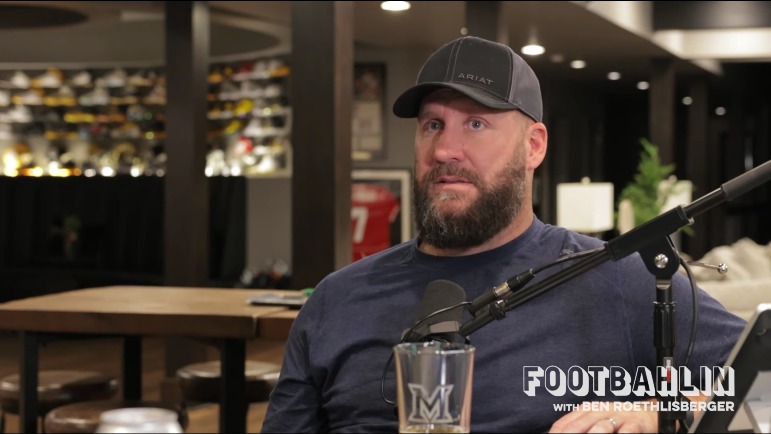 Pittsburgh Steelers rookie wide receiver George Pickens finished out his rookie campaign with 52 receptions for 801 yards and four touchdowns, including three catches for 72 yards and a touchdown in the season finale win over the Cleveland Browns. Pickens probably should’ve had another catch along the sideline that was ruled incomplete on the field but ultimately wasn’t reviewed. On episode 19 of his Footbahlin’ podcast, former Steelers quarterback Ben Roethlisberger offered praise for Pickens but warned the young wideout to not get too big of a head.

“Feel like he can make every catch. High balls, low balls, back shoulders. It just seems like when it’s in his area, he’s going to make the play,” Roethlisberger said. “I just pray that young man can stay focused, stay dialed in.”

He then offered some advice for Pickens to build off his success from this year.

“Don’t take from the success you had this year and let it ride. Take it and double down on it, triple down on it. Keep striving to want to be better, because if you’re not careful, your attitude and things like that can kind of get you in a bad spot, thinking that you’re better than you are,” he continued.

He closed by saying that he believes Pickens can be a special player.

“He has the ability and has shown to be a superstar.”

Pickens’ body control and contested-catch ability are up there with the best receivers in football. He’s an athletic freak, and he had the most contested catches t by a rookie since at least 2016. In a loaded wide receiver class, the Georgia product has so far looked to be a steal in the second round.

The MOST PFF has ever charted by a rookie in a single season (2016-present). pic.twitter.com/xS2lQ5WvUS

But Roethlisberger is right that the young wideout has to keep his head on straight and continue to strive for success. Mike Tomlin gave Pickens a vote of confidence the other day and said he miscategorized prior to the draft when he was often given a label of a guy with character concerns. Pickens also noticeably had an outburst during the team’s game against the Atlanta Falcons when he hadn’t yet been targeted, despite the Steelers leading the game. You can’t knock a receiver for wanting the ball in his hands and wanting to make plays, but a public outburst on the sidelines in a game where the gameplan wasn’t really to throw the ball is a tough look, especially for a rookie receiver. But if anyone help can get his emotions in check and help him see the bigger picture, it’s Tomlin.

If Pickens continues his upwards trajectory, he could be the next great Steelers wide receiver. Alongside Diontae Johnson, Pickens gives the Steelers two legitimate threats down the field for quarterback Kenny Pickett, and rookie Calvin Austin III, who missed all of 2022 with an injury, could soon join the two on that list. If you include tight end Pat Freiermuth, that could give the Steelers four legitimate weapons in the passing game heading into 2023, although it’s hard to really expect too much from Austin given that he has yet to see game action.

Regardless, it’s going to be an interesting offseason for the Steelers and could potentially be an exciting 2023 season. If the progress that Pickens and the rest of the offense showed toward the end of this season carries over into 2023, the Steelers could be a legitimate threat in the AFC.