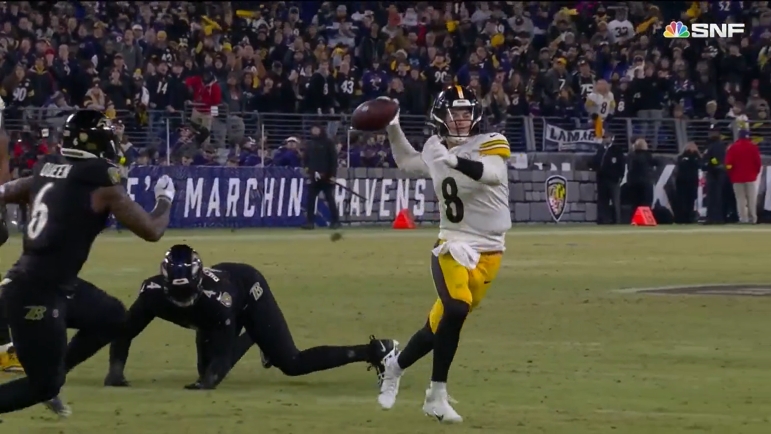 On Sunday, the Pittsburgh Steelers ended their season with a 28-14 victory over the Cleveland Browns. Rookie quarterback Kenny Pickett once again continued his trend of good performances in the second half of the season as he hit on a couple of big throws to help the Steelers win the game.

With the season now over, many analysts are reviewing the play of young players and giving them grades. CBS Sports writer Chris Trapasso has been grading young quarterbacks each week, and today he came out with his final grades for the season. Pickett finished with a C+ and specifically a 78.75, which ended up being third best of all the qualifiers (players who appeared in five or more games and had significant playing time in them).

“Pickett had a very natural rookie-year progression,” wrote Trapasso. “He started slowly and for a minute, there was some justifiable concern about his lack of development. As the season rolled into December, Pickett hit his stride. The arm-talent was there all season. He made better decisions and was more accurate the more he played. He didn’t set the NFL on fire down the stretch but there were encouraging signs for his future late in his rookie campaign.”

While Pickett certainly struggled early on in the season, throwing eight interceptions and only two touchdowns in the first five games, he completely turned it around after the bye week. In the final nine games of the season he threw five touchdowns and only one interception while leading four game-winning drives.

The Steelers need Pickett to take a big jump next year if they want to get back to competing for Super Bowls. But, if how Pickett improved during the season is any indication, he probably will take a huge jump. Pickett’s biggest struggles this year were leaving a clean pocket too early and missing on the deep ball. If he can sort those two issues out this offseason the Steelers will have a gem.