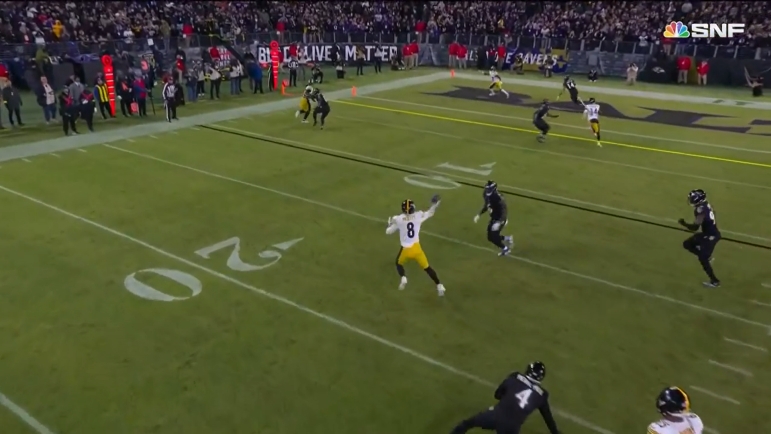 Even on the game-winning touchdown, Kenny Pickett threw to Najee Harris in Sunday night’s win over the Baltimore Ravens, one flaw in Pickett’s game was evident. A tendency to leave the pocket too early, inviting pressure, and making life a bit tougher on his offensive line.

Speaking to reporters Wednesday, Pickett admitted he was quick to slide and run on the game-winner.

“No, I should have stayed in the pocket a little bit more,” he said via a team transcript. “I drifted too much on that. But once I felt that close, I just kind of shrugged and got out of it, and then just kept my eyes downfield. [Najee Harris] did a great job of adjusting his route to get in the end zone.”

It’s something we noted in our breakdown of his best throws of the day. Overall, it was still a great play, working the scramble drill, keeping his eyes downfield, and throwing an accurate ball in a clutch moment. But on the snap, as you’ll see below, Pickett drifts left instead of straight back on the snap. It changed the junction point for LT Dan Moore Jr. and RDE Jason Pierre-Paul, who could more easily rush at an upfield angle to pressure Pickett.

Had Pickett been sacked here, he likely would’ve been criticized for creating and inviting the pressure. But that’s the risk/reward and the benefit of being a quarterback who has mobility. Sometimes they can escape the pressure they invite in.

Overall, his mobility has been an asset this year. Scrambling when nothing is there, tweaking the coverages defenses play against him, 2-Man across the league is down this year due to the threat of quarterbacks running, and Pickett’s now using his natural athleticism to extend the play and improvise. Players are responding and he’s developed chemistry with the likes of TE Pat Freiermuth and Harris.

Throughout the game and even during the year, Pickett explained how he balances staying in the pocket versus escaping.

“It’s just kind of a feel thing. I feel like I have pressure, or you have that clock in your head where you got to your third progression, it’s not there, it’s time to go. The pocket collapses fast at this level. So, I just want to continue improving getting the ball out of my hand, and when I’m extending, just keep my eyes downfield and try to find guys open.”

Pickett has certainly improved in keeping his eyes downfield, including on that final drive against the Ravens, hitting TE Pat Freiermuth in similar fashion for 20 yards earlier in the drive. He’s now scrambling to throw, not run, a departure from how he played earlier in the year. It signs he’s getting more comfortable on the field. Though this tendency to drift and bail also shows, he still has a little ways to go.