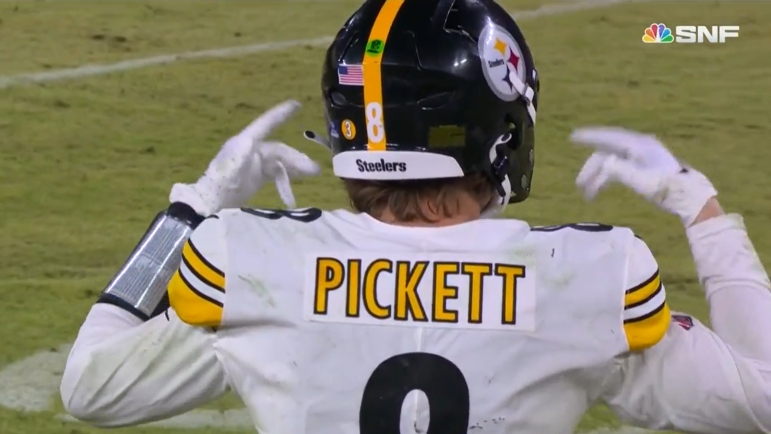 2022 was a bumpy road for Kenny Pickett. In 2023, Pro Football Focus expects nothing but smooth sailing. In its list of 32 breakout players across the league for next season, author Sam Monson chose Pickett for the Steelers. An obvious choice that doesn’t require a ton of explanation but here’s what Monson wrote:

“Kenny Pickett’s numbers don’t look good this year, but his performance was consistently better than the statistical rewards it was reaping. He finished the year with a PFF grade of 75.5 – a comparable number to that of Daniel Jones in New York – but Pickett had just seven passing touchdowns to nine interceptions. Pittsburgh retaining its offensive coaching staff doesn’t make this any easier, but a step forward from Pickett should make those numbers take a big jump.”

The first line is the most important part. Pickett’s numbers look crooked, more interceptions than touchdowns, a completion percentage that ended up at only 63%, but his tape was better than the numbers. And even his stats improved the back half of the season, throwing just one interception after the bye as the Steelers went 7-2 and nearly wiggled their way into the playoffs.

Pickett showed the ability to make more plays on the run, keeping his eyes downfield and looking to throw instead of simply taking off. He made plays off-script and outside of structure and led two game-winning drives in back-to-back weeks, the first rookie in NFL history to do so, to beat the Las Vegas Raiders in Week 16 and Baltimore Ravens in Week 17. All things that cement his spot as the team’s unquestioned starter for 2023. His leadership was also on display, taking charge of a young offense that lacked a face or direction.

Pickett is an obvious choice to breakout next season and he should be better on tape and statistically. One area he must improve in is red zone play. An issue we’ve discussed throughout his rookie season, he was one of the league’s worst red zone quarterbacks. Of quarterbacks with 50+ red zone attempts, only Buffalo’s Josh Allen had a worse QB rating than Pickett’s 73.2 and no quarterback had a lower completion percentage than his 41.5%. Those numbers likely don’t fall solely on Pickett, scheme and wide receivers impact it as well, but they’re numbers Pickett must not repeat in 2023.

George Pickens feels as good a breakout player as any. A relatively raw rookie unlike the more polished Pickett, he’ll benefit from being in Year Two and having Pickett be the team’s starter out of the gates. Pickens should see more consistent volume as his game grows and he becomes a more well-rounded player. TE Connor Heyward and LB Mark Robinson are two other worthy “breakout” candidates, though the Steelers success will be tied to what Pickett does, good or bad.