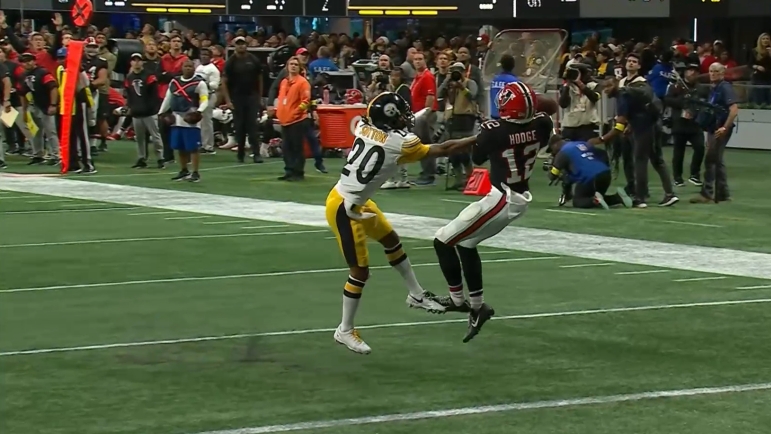 When Cam Sutton goes to get paid this summer, he’s probably going to bring this graph with him. For all its criticism, Pro Football Focus does a good job of providing stats and data. Wednesday, Pranav Rajarm compiled PFF data to make four quadrants of NFL corners: lockdown, solid, boom/bust, and liabilities.

For Cam Sutton, he graded out in “lockdown” territory with the two key factors: a high incompletion rate and a low receiving yards per target number.

– Sauce Gardner is ridiculous, DROY without a doubt
– Ravens secondary has struggled
– Darious Williams was an underrated offseason signing by the Jags#nflverse pic.twitter.com/Ahqs5jspfq

Based on the graph, Sutton is allowing only six yards per target and forcing roughly a 19% incompletion rate, numbers that better most cornerbacks in football. The only ones in the league clearly better than him are names like Atlanta’s AJ Terrell, Philadelphia’s James Bradberry, and New York’s Sauce Gardner. It’s worth noting New Orleans’ Alontae Taylor occupies the “lockdown” quadrant. Taylor and Sutton both hail from the University of Tennessee so it’s something about being a Volunteer that makes for a good NFL corner. Compare that to Levi Wallace who is in the “go big/go home” category.

As the numbers suggest, Sutton’s tape has been solid. He has a career-high three interceptions to go along with a career-high 14 pass breakups. In a full-time role as an outside corner and more comfortable there than 2021, he’s easily been the Steelers most consistent and best corner on the season. Beyond the tape, his versatility and ability to play outside corner, in the slot, or spin and rotate as a safety offers the defense plenty of flexibility and has helped Minkah Fitzpatrick have a less static role.

The only downside to Sutton’s great season is the impending payday Pittsburgh will have to offer if they want to pay him. Sutton earned only $4.5 million per season on the deal he signed in March of 2021, a severe underpay for his current production. While it’s tough to peg his market value right now, he’s likely going to earn at least $10 million per year this offseason. Dave Bryan has floated the idea of him earning upwards of $13 million per. The Steelers have the cap space to afford him but there won’t be any cheap deal this time around. And knowing how cornerbacks get paid on the open market, it wouldn’t be wrong of Sutton to get a feeling for his price tag if he hits the open market.

Pittsburgh’s cornerback room has been largely shaky this season. Ahkello Witherspoon hasn’t panned out nor has the Steelers trade for William Jackson III, who practiced once with the team before landing on injured reserve. Levi Wallace has improved the second half of the season while James Pierre has shown flashes but struggled with consistency. Retaining Sutton would be wise. But it will cost a pretty penny.