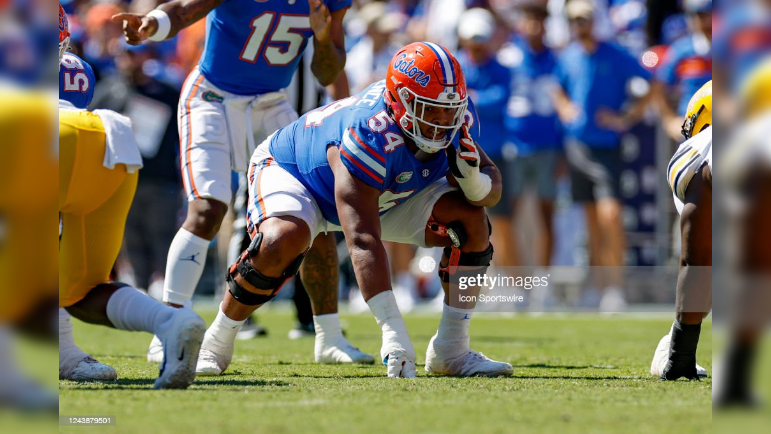 The Pittsburgh Steelers’ 2022 season is officially in the books with the team finishing with an 9-8 record but failing to make the playoffs. With the season now in the rearview mirror, many will turn their attention toward the offseason and more specifically the 2023 NFL Draft. Now that Pittsburgh has officially been eliminated from playoff contention, they are set to pick 17th overall in the first round and own the top pick in the second round thanks to the Chase Claypool trade with the Chicago Bears.

While we still have the all-star games, NFL Combine, and Pro Days upcoming prior to the draft this spring, it’s never too early to go through mock draft scenarios and project player/prospect fits who the Steelers may be interested in given their current needs on the roster and the talent in this upcoming draft class. For this specific scenario, Pittsburgh takes a less “splashy” approach to the draft as they build up the front seven of the defense and the offensive line.

Analysis: GM Omar Khan and Assistant GM Andy Weidl aren’t fooling around this offseason as they add some much-needed beef and nastiness in the trenches. Pittsburgh likely will opt to keep Mason Cole at the pivot and look to address one of the key weaknesses on the left side of the offensive line. While many will clamor for a LT here in the first round, LT Dan Moore Jr. has shown positive signs of growth this season. While LG Kevin Dotson has also had flashes, his inconsistencies can be frustrating, along with the fact that he will be a free agent after the 2023 season.

If I were a betting man, Florida OG O’Cyrus Torrence would be on my short list of players I expect Pittsburgh to target this spring at the top of the draft. Torrence is the definition of a road grader, having the size and power to displace almost any man off his spot in the running game. Torrence also has impressive athleticism for his 6’5, 347lb frame, being able to mirror in pass protection and find work while on the move.

Torrence transferred to Florida from Louisiana Lafayette this spring and ironically would replace fellow former Rajin’ Cajun Kevin Dotson at the LG spot. Adding Torrence to the OL would vastly help Pittsburgh’s ability to run up the middle while providing a solid pass protector that can develop into a long-term starter at the pro level.

Gets hand leverage for feed blocks
Pries holes open w/ torque
DRIVER and finisher
Good balance in run game
A wall once he leverages his gap
STRONG hands and placement
Stymies stunts w/ length and pop in his handspic.twitter.com/W97E2dVWjW

Analysis: The Steelers saw improvement along the defensive line down the stretch this season, but with the status of Tyson Alualu, Larry Ogunjobi, and Chris Wormley all up in the air after this season as free agents, Pittsburgh should continue to inject youth and starting-caliber talent into the trenches. Enter USC’s Tuli Tuipulotu who had himself a breakout season, registering 46 total stops, 22 TFLs, 13.5 sacks, two forced fumbles, and three PBUs.

Tuipulotu has the size of a 3-technique/4i in Pittsburgh’s scheme and can play up and down the LOS, having real pass-rush juice both inside and out on the edge. He needs to be a more consistent run defender, but Tuipulotu’s pass rush is a valued trait as an interior DL. Adding Tuipulotu to a defensive line led by Cam Heyward with rookie DeMarvin Leal already flashing in his first season can help Pittsburgh usher in the next wave of defenders at the LOS with Heyward getting another year older.

Analysis: The Steelers tried to go the cheap route and invest two-year deals with an average yearly value of $4 million into CBs Ahkello Witherspoon and Levi Wallace this offseason. While Wallace has played well at times, neither cover man should be considered a #1 CB.

Pittsburgh nabs a potential CB1 here in the second round, selecting Illinois CB Devon Witherspoon. Witherspoon may not have freaky size (6’0″, 180lb) or physical tools, but he is a physical, feisty competitor that embodies what you look for in an NFL cover man. Witherspoon posted 41 total stops, 2.5 TFLs, three INTs, and 14 PBUs. He was named the Big Ten Defensive Back of the Year and was recently elected to Pro Football Focus’s 2022 All-American Team for his efforts this season. He has the makings to be a quality cover corner and has the demeanor of being a willing, physical run defender Pittsburgh looks for in their CBs.

Analysis: While LB Devin Bush has improved in his play this season after a dreadful 2021 campaign, he is scheduled to hit free agency. With Myles Jack struggling to live up to the contract that Pittsburgh signed him to this past offseason and the current state of the team’s run defense, investing premium draft capital in a solid run stuffer at ILB would be a wise investment.

The Steelers opt to bring in an off-ball linebacker that has the size and temperament you look for in a quality run stopper, selecting Iowa’s Jack Campbell in the third round. Campbell makes plays all over the field as a downhill run stuffer that can fight off blocks as well as a capable zone coverage defender. He isn’t the most dynamic athlete in terms of burst or twitch, but the 6’5″, 243lb senior has the size, tenacity, and instincts you want in an off-ball linebacker that can play in the middle of an NFL defense for years to come. He is an experienced starter that would provide steadiness and reliability to the LB core that Pittsburgh desperately needs.

#Iowa LB Jack Campbell is a cyborg. Run through a TE on his way from far hash to outside the numbers to tackle a first-team All-Conference back. pic.twitter.com/m0QeUxFYlW

Analysis: Pittsburgh faces tough decisions along the defensive front with Tyson Alualu, Larry Ogunjobi, and Chris Wormley all scheduled to hit free agency this offseason. Instead of bringing back multiple veterans on contract extensions, they could opt to inject more youth upfront with the selection of Tuipulotu earlier and address NT with Texas’ Keondre Coburn in Round Four.

Coburn is a mammoth of a man in the middle for the Longhorns defense, having a stout 6’2″, 348lb frame. He has the size and strength to eat blocks in the middle as well as the power to push the pocket. Despite being more of a run plugger, Coburn has a fair amount of twitch as a pass rusher as well, posting 2.5 sacks and four TFLs this season. Coburn can come in and play 25-30% of the defensive snaps in Pittsburgh’s base defense, giving them a stout run plugger in the middle that has the mobility and motor to chase down ballcarriers and affect the passer more than a traditional nose tackle would.

Keondre Coburn puts on the cape and forces another Adrian Martinez fumble.

Jaylan Ford cashes in his second takeaway of the game with the fumble recovery #HookEm | @Horns247 pic.twitter.com/t3XZ79KWiH

Analysis: The Steelers traded WR Chase Claypool to the Chicago Bears in a deal they couldn’t refuse, nabbing a high second-round pick for the underperforming WR. Pittsburgh has a knack for finding receivers later in the draft, and they do so again by selecting Nathaniel “Tank” Dell out of Houston. Dell has been accumulating stats for the Cougars the last two seasons, topping 1,300 yards last season and has followed that up with 109 receptions for 1,398 yards and 17 scores in 2022.

Dell is electric with the ball in his hands, having the elusiveness to make defenders miss in open space as well as the speed and acceleration to generate plenty of YAC after the catch. Dell is undersized by NFL standards (5’10″, 165lb), which will likely affect his draft stock, but for a team needing more explosive plays in the passing game and a player that can create with the ball in their hands, Dell brings that skill set as a receiver as well as a dynamic returner to the table. He would be a great Day 3 selection for Pittsburgh to put in the slot along with WR Calvin Austin III as both should hopefully generate more splash plays after the catch for an offense that needs more splash next season.

Analysis: The Steelers close out the draft by addressing depth behind Dan Moore Jr. and Chuks Okorafor at OT by selecting OT Richard Gouraige out of Florida. Gouraige stands 6’5″, 308lb and good footwork, possessing the quickness to mirror side-to-side in pass protection as well as kick step to set the depth of the pocket as an ideal developmental tackle prospect. He needs to continue to get stronger, but his athleticism, frame, and experience make Gouraige an ideal developmental tackle that can come in and compete to be Pittsburgh’s swing tackle next season and provide depth to either tackle spot.