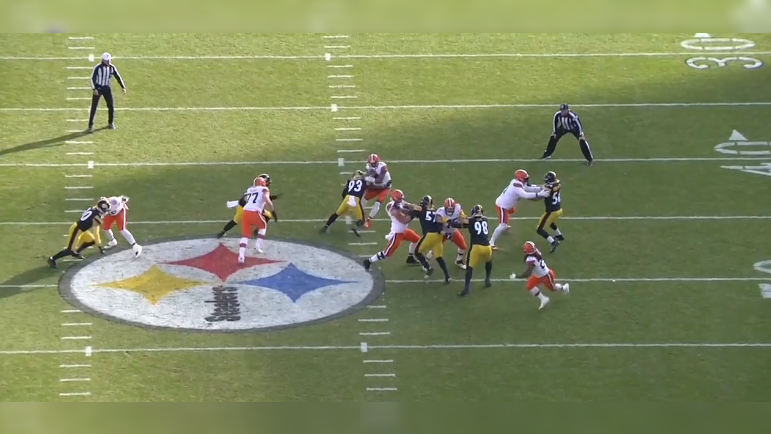 After being one of the better tackling teams in the league all season long, the Pittsburgh Steelers put up their worst performance of the season in the tackling department in the season finale against the Cleveland Browns.

Though the Steelers won the season finale 28-14 to finish 9-8 and just narrowly miss the playoffs, the Steelers missed a season-high 12 tackles in the two-touchdown win.

Previously, the season-high — ironically — came in Week 3 on Thursday Night Football against the Browns when the Steelers recorded 11 missed tackles.

The Steelers really had a tough time corralling Cleveland quarterback Deshaun Watson in the pocket at times on Sunday. He was a slippery player overall in the pocket, consistently extending plays with his legs and turning broken plays into positive outcomes.

Add in the abilities of running back Nick Chubb in space too, and it was always going to be a long day for the Steelers defense.

Robinson is a bit amped up at times and can be overaggressive in pursuit, which is what happened on the second play from scrimmage on a dump off from Watson to Chubb underneath.

Robinson does a really nice job initially of getting depth in his drop after the play action, taking away the crossing route to Donovan Peoples-Jones. He’s able to read Chubb on the option route out of the backfield though and fires downhill. Everything looks good until he simply falls down, resulting in the missed tackle that Chubb takes for a huge gain early in the game.

Later on in the first half, Robinson records his second miss of the game, again coming downhill overaggressive and a bit out of control on the delayed blitz against Watson in the pocket.

Robinson is initially responsible for Kareem Hunt out of the backfield, but seeing the big running back seemingly in pass protection, Robinson fires downhill. You can see the great speed and explosiveness he has, but he’s out of control at the point of contact against Watson, allowing the veteran to easily step out of the tackle attempt, hitting Hunt for a check down to move the chains.

As head coach Mike Tomlin likes to say, you’d rather say “whoa than sic’ em” when it comes to not only young players, but defenders as well. With Robinson though, that’s where he’s going to have to improve in the offseason, figuring out how to maintain that hair-on-fire style of play while adding some overall consistency to his game.

On the final play of the first half, Alex Highsmith and Robert Spillane recorded missed tackles as Watson — after fumbling the shotgun snap — turned on his Houdini act.

Spillane and Highsmith do a good job of fighting through the rep to get back into action against Watson, but Spillane goes low, missing the tackle that Watson spins out of, and Highsmth goes high, missing right over the top of Watson.

Fortunately, the defense was there to clean up the misses, resulting in a short gain, sending the two teams into the half.

In the second half, the Steelers were a bit better overall in the tackling department, but in the fourth quarter the defense fell apart a bit from a tackling perspective.

Slot cornerback Arthur Maulet recorded a miss on Chubb in the backfield on a blitz. Maulet did a nice job of getting around a blocker to get a shot at Chubb in the backfield. However, he goes low against Chubb, which is never a good thing to do for a smaller defensive back against a guy like Chubb.

The Browns’ star running back steps right through the tackle attempt and then runs through an arm tackle attempt from Cameron Heyward, getting to the second level quickly against the Steelers before being corralled.

On the year, the Steelers did a nice job overall in the tackling department, finishing with just 97 total missed tackles in 17 games. That’s a season-best number, per my tracking, since I started tracking missed tackles for the site in 2015. Of those 97 misses, 23 occurred against the Browns. That’s 24% of the Steelers misses on the year in just two games.

Offensively, the Steelers recorded 10 forced missed tackles in the win, meaning they lost the tackles battle by a mark of -2, dropping the season record to 12-4-1 to close the year. Sure would be nice if that was the Steelers overall record, wouldn’t it?

Few running backs in the NFL were better than Najee Harris in the second half of the season. Finally healthy and well-versed in the blocking style of his offensive linemen in front of him, Harris was an absolute battering ram in the second half, giving the Steelers’ offense a real identity.

He looked explosive at times, too, and really couldn’t be tackled by a single defender. The Steelers’ second-year running back got off to a good start on Sunday against the Browns, looking very good early on.

A few plays into the game, Harris showed just what type of game it was going to be for him, as far as forced missed tackles went.

Harris was able to force two Cleveland defensive backs to miss near the line of scrimmage with good lateral agility, jumping outside of the one tackle attempt with a well-timed jump-cut, before then slipping back inside to get up field and force the second miss. He nearly forced a third and broke free into the second level before a host of Browns got to him.

He was a significant factor all day long.

His best forced missed tackle of the day came in the third quarter though right before his rushing touchdown.

Harris does a fantastic job of bending this run back to his left, getting underneath of the block from right guard James Daniels to get into the hole. Once there, he perfectly executes the spin move on the Browns’ defensive back, causing him to whiff in space badly.

While the run doesn’t go for big yardage, it showed just how special Harris is in a phone booth when it comes to forcing defenders to miss. Seventy-two forced missed tackles on a season in which he started rather slowly and wasn’t himself until the second half is pretty darn impressive.