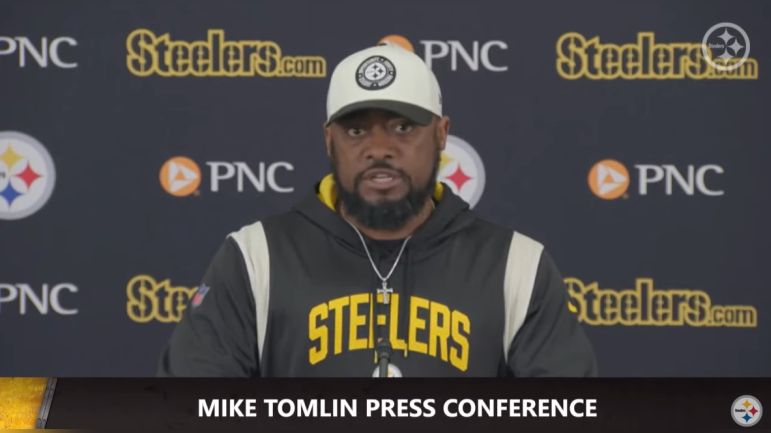 Mike Tomlin used his Tuesday press conference to discuss the top NFL story of the day, Buffalo Bills’ safety Damar Hamlin. Hamlin collapsed and needed CPR and an AED after making a tackle in the first quarter of Monday night’s game against the Cincinnati Bengals. Taken by ambulance to a Cincinnati hospital, he remains in critical condition.

Steelers’ players and athletes around the world have sent Hamlin, a Pittsburgh native who played at Pitt, their best over the last 15 hours. Tomlin did the same with his opening statement.

“It’s a really personal thing for me,” he said via the team’s YouTube channel. “Being a Pittsburgher. And that young man being a Pittsburgher. I’ve known that young man since he’s probably been twelve. Just got a lot of love and respect for him as a human being. His commitment to his pursuit of his goals and dreams of doing what he’s doing right now which is playing in the NFL. To watch him make personal decisions and make that a realization. It’s just an honor to get to know young people like that.

“Had an opportunity to express that to him whenever I see him. We played Buffalo each of the last two seasons and he and I get to have a moment. It’s cool to not only appreciate these guys in terms of where they are now but to know them since they were younger people. To watch their maturation and development. To watch them earn what they’ve been chasing. It’s just really a cool thing. He’s an example of that. Got a lot of love for that young man. We lift he and that organization up in prayer.”

Tomlin said he’s reached out to Bills’ head coach Sean McDermott, teammates together at William & Mary, to help however he can.

Hamlin’s injury left Bills’ teammates in tears as doctors and other medical personnel attended to him. According to the ESPN broadcast, Hamlin was given CPR for up to nine minutes.

According to a statement released by the Buffalo Bills just before 2 AM this morning, Hamlin went into cardiac arrest and had to have his heart restarted on the field.

Damar Hamlin suffered a cardiac arrest following a hit in our game versus the Bengals. His heartbeat was restored on the field and he was transferred to the UC Medical Center for further testing and treatment. He is currently sedated and listed in critical condition.

The Bills/Bengals game has been suspended with no makeup date announced. Right now, the focus is rightly on Hamlin’s health and well-being.

Fans from all corners of the globe have shown their support for Hamlin. A GoFundMe toy drive has now raised $4 million since last night. If you would like to donate, you can do so at the link here. We’ll continue to provide updates on Hamlin’s condition when they become available.