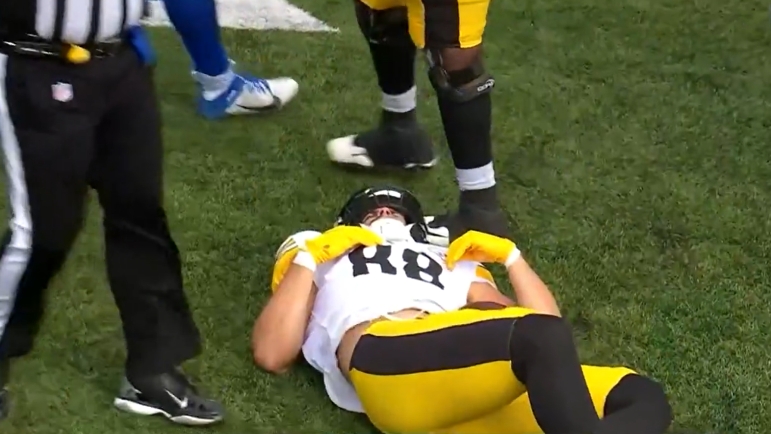 For all the wrong and scary reasons this year, concussions were a regular part of football discussion. Highlighted by what happened to Miami Dolphins’ QB Tua Tagovailoa and the team’s mishandling of his health, it’s one of the dark underbellies of football.

Earlier this season, Mike Tomlin had a decision to make. Tight end Pat Freiermuth was concussed against the Buffalo Bills and tried to get cleared for the Tampa Bay Buccaneers game the following Sunday. Freiermuth asked Tomlin to play but his request was denied.

Speaking to CBS’ Aditi Kinkhabwala Tuesday on her Off The Field podcast via 93.7 The Fan, Freiermuth briefly reviewed what happened.

“When I had my first concussion this year, I was like, ‘I wanna play.’ And [Tomlin] told me, ‘absolutely not. You’re not playing.'”

Freiermuth took a hard shot against the Bills in Week 5, a hit that appeared to temporarily knock him unconscious. He was quickly put into concussion protocol and missed the following week, returning in Week 7 versus the Miami Dolphins.

HEAD SHOT: Steelers TE Pat Freiermuth sustained a concussion and is out for the rest of today's game pic.twitter.com/Sc4hZ1PNg5

Regarding concussions, Freiermuth’s already had a concerning start to his career. He suffered two as a rookie and a third this season, a troubling number for a player just two years in. But when healthy and available, he’s been productive, catching 63 passes in 2022 and making far more plays downfield this year than last.

Still, when it comes to health, Tomlin errs on the side of caution. His stance with Freiermuth was similar to the choice he made a decade ago to hold FS Ryan Clark out of a game in Denver due to his sickle cell, nearly dying in a previous matchup and needing his spleen and gallbladder removed. It was something Tomlin spoke of during his offseason interview with Clark’s podcast, The Pivot.

Thinking about how the Dolphins handled Tua over the past week. Compare that to Mike Tomlin, who held Ryan Clark out of the Denver game due to his sickle cell – despite him being medically cleared – in case something happened.

"I got an obligation to safeguard him." pic.twitter.com/grU7sdrpMj

Freiermuth told Kinkhabwala he listened to that interview and Tomlin’s fatherly mindset is one reason why players respect and play hard for him.

“It just goes back to why guys wanna come to Pittsburgh and play for Coach T.”

Before Freiermuth hit the field the following week, he and his parents talked with team doctor Mickey Collins, who walked them through the evaluation process and protocol.

“He had multiple meetings with my parents and myself and he explained everything. To the point where my parents obviously felt comfortable with me making a decision and the coaches making the decision.”

Of course, there have been Steelers who have played the week after a concussion, including QB Kenny Pickett. But Tomlin trusts the doctors and follows their lead. And when there’s a question about if a player should play, he’s proven he’ll wait a week instead of jeopardizing the players’ health, setting the standard for how coaches should treat players across all sports.