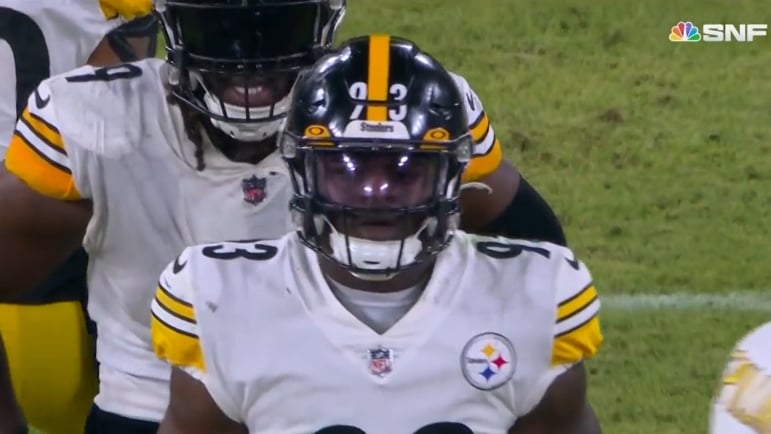 The Pittsburgh Steelers drafted seven players last year. Six made the initial 53-man roster. The seventh-round selection of quarterback Chris Oladokun still remains baffling given that there was no appearance of any intention of actually giving him a reasonable opportunity to compete for a job.

The rest, however, remain in the mix, and that includes their other seventh-round pick, inside linebacker Mark Robinson, who began to build up a contributing defensive role late in the season after spending most of the year as a healthy scratch. He logged 37 snaps in the final two games, registering nine tackles. His teammates are happy to see him get the opportunity.

“I’m excited for guys like Mark Robinson, who hasn’t really had a chance to show what he can do,”, defensive lineman Chris Wormley told Brooke Pryor of ESPN earlier this week. “And then that Ravens game, he had a pretty good game. I think seven tackles helped stop the run, which is the reason why he got elevated that week and started and played a bunch”.

The Week 17 game against the Baltimore Ravens was both his most extensive and most promising showing. He technically was given the opportunity to start and played half of the snaps, which in that particular case only amounted to 26, but he racked up seven tackles in the process.

Sure, he looked a little lost sometimes, but he played to his pre-draft scouting profile. He loves to play forward and to contact. He still has a lot to learn about the nuances of the game and how to read his keys and how to respond to them, but he has time for that.

Robinson entered the transfer portal multiple times during his college playing days, settling in at Ole Miss where he was originally recruited as a running back, the position he played all his life. He was convinced to move to inside linebacker for the Rebels and played out his senior season with 91 tackles and three sacks.

He showed enough promise with his athletic traits to get the Steelers interested in him on a seventh-round flier, and his willingness to throw his weight around in training camp and the preseason when the pads came on helped him earn his way to a spot on the 53-man roster.

But, as mentioned, he sat for most of the season as a healthy scratch behind Myles Jack, Devin Bush, Robert Spillane, and Marcus Allen at the inside linebacker position. He dressed for only five games, in one of which he did not even see the field.

He only played on defense in the final three games of the season, including seven against the Carolina Panthers. He played 11 snaps in the finale against the Cleveland Browns, but this was his worst showing. He frequently seemed to look lost and missed cues and assignments. The coaching staff still has its work cut out when it comes to getting him all the way up to speed on defense.