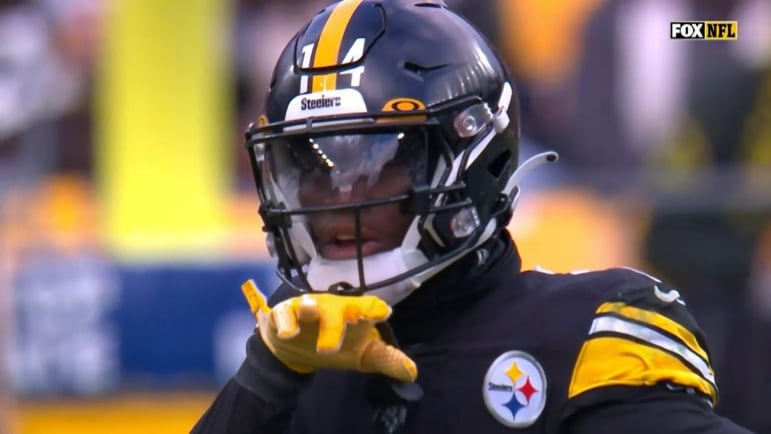 The Pittsburgh Steelers rookies players great this year. From Kenny Pickett to undrafted rookie Jaylen Warren, almost every rookie who made the team had an impact on the season. But one rookie stood out above all the others. Wide receiver George Pickens.

Whether is was the “Catch of the Season” in Week Three, or being on the receiving end of the “Immaculate Completion” to beat the Raiders on the game the Steelers were honoring the Immaculate Reception and the late Franco Harris, Pickens was always reliable and electric.

Today, the Steelers season ended and Pickens was asked to describe his rookie season.

“I’d probably say that one word to really describe it is great, or fun, or entertaining,” Pickens said in a transcription provided by the Steelers. “My first year, not knowing a lot of things, and just getting used to the fans and the fans getting used to me.”

Pickens finished the season with 52 catches, 801 yards, and four touchdown catches and one rushing touchdown. Three of Pickens’ four touchdown receptions came on the back half of the season as he and Pickett gained more and more chemistry.

Pickens has also become a fan favorite due to social media. Pickens blew up on social media for his reaction to getting drafted and has since taken his attitude of being upset of falling to the second round onto the field.

Pickens has been known to wave at goodbye to teams and their fans after he or a teammate make a game clinching play, as seen below as he waved and laughed at Baltimore Ravens fans after Minkah Fitzpatrick picked off Tyler Huntley to beat the Ravens.

While he is not an elite receiver yet, Pickens is on that path. A great combat catch receiver, Pickens snags almost anything thrown at him and was one of Pickett’s favorite targets. Given his ability to make big play after big play, and his Hines Ward-esque hatred of opponents he has become loved by the Steelers fanbase. This is probably what made the season so fun.

Obviously Pickens wanted to make the playoffs and keep winning but that didn’t happen. The Steelers ended the season on a high note with a win, he had some pretty good stats for a rookie, and the whole fanbase likes him. How could he not have fun?