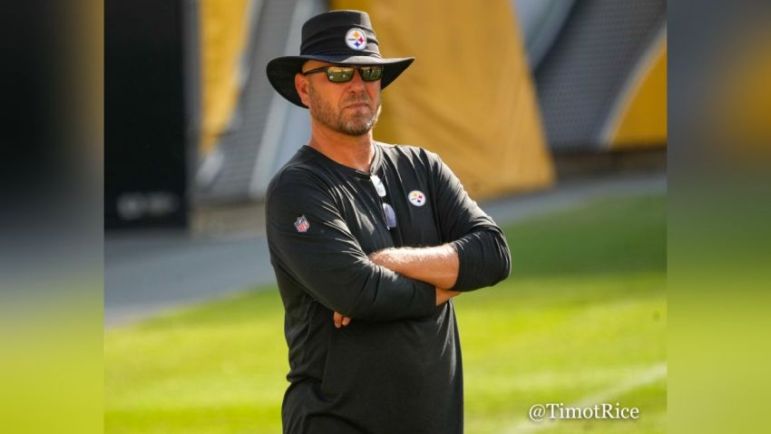 It’s time to land the plane.

That couldn’t apply any better to the man with the name from up north, offensive coordinator Matt Canada.

Here’s the bottom line. No more excuses. No more building. No more “getting better.” Do or do not. There is no try.

It’s time for Canada to make this Steelers’ offense good. It’s time to land the plane.

Bringing Canada back is an unpopular decision. And not one I would’ve made. But we were among the first to float the possibility of his return, writing in November not to be shocked if he remained the team’s OC if for nothing else, because of the Steelers’ offensive improvement and the fact we believed – and later confirmed – he was under contract through 2023.

There are understandable, though not necessarily agreeable, decisions to keep him. In the interest of continuity, an offensive intact on and off the field with the goal of improving on what they did at the end of 2022. Things did get better in the latter half of the season.

Now, better isn’t enough. In Canada’s two years as OC, the Steelers have finished 21st and 26th in points per game. They’ve lacked explosive plays, 102 of them gaining 20+ yards since 2021, tied just 28th in the league over that span, while their red zone offense has been 23rd both years. They’re consistently below average, I’ll give them that.

Canada had his share of obstacles. He wasn’t stepping into a perfect situation, a well-oiled machine. Especially in 2022, with a change at quarterback and running one of the youngest offenses in football, growing pains were to be expected. And they were absolutely felt. The offense worked through that and by year’s end found stability. They weren’t winning games but they weren’t losing them either with mountains of penalties, turnovers, and poor assignment football.

Still, how much better was it? Scoring only 30 points once all season and that came in a loss and scoring only more than 25 points in two games. They were held under 20 points in four of their last six games and relied on a couple of clutch Kenny Pickett drives to engineer victory. Expecting them to burst out for 40 points a game was unrealistic and Pittsburgh’s conservative and ball-control style naturally kept the score down but big picture, averaging 18 points per game isn’t going to get this franchise where it wants or needs to go.

That makes 2023 make or break. Yes, it’s going to have its issues. The Steelers won’t have a top-five offense. There will be more ups and downs along the way. Don’t count on this offensive line staying as remarkably healthy as it did. Slim chance the same starting five start all 17 games the way they did this season. But the time for excuses is over. In 2021, it was Canada’s first year as an NFL OC, a tricky relationship with a veteran QB in Ben Roethlisberger trying to mash together their ideals. In 2022, it was a new chapter, a quarterback “battle” (on paper, anyway) with the team switching from Mitch Trubisky to Pickett a quarter into the year and redefining how their offense operated, now centered around the ground game instead of its quarterback, a departure of the previous 15 years. There can’t be a “yeah, but” in 2023. It either works or it doesn’t.

Context to situations is always important, it’s kind of what we do around here, but there’s a point where you just need results. You need points, you need big plays, you need to produce and translate talent and potential into positive, consistent outcomes. Pittsburgh doesn’t need to have the #1 ranked offense for Canada to pass the test. But they should be better than average and much improved in those key areas. Big plays, red zone, with Canada running better constraint plays and building off his core concepts. A smarter route tree that doesn’t pin Diontae Johnson to the sideline (yes, Johnson has his own issues, both can be true) and provides greater YAC opportunities for the entire team, especially if the offense will be rooted in short and intermediate concepts.

I understand this offense could evolve and that process won’t happen overnight. The Steelers just exited 2004. A rookie quarterback playing earlier than expected, the team leaning on its ground game and defense. They evolved over time into something more explosive. But even that ’04 group ranked 11th in points per game. In 2005, they were 9th. In 2022, Pittsburgh averaged 18.1 points per game, barely more than they did in 2019 without Roethlisberger and basically any offensive weapon. That was a bad offense that had zero talent. This group has talent. It needs refinement, it needs time, but there’s talent. The last two drafts have done nothing but stockpile offensive weapons.

The Steelers want to give Canada a pass for the last two years? Fine. I get it. But 2023 is the year that needs to change. In a serious and significant way. Not small steps. Not gradual growth. This is the year to make the leap. An offense staying in place, young guys who should make big jumps in play. That’s not the goal. It’s the expectation.

Put the wheels down, Matt. Time to land the plane.