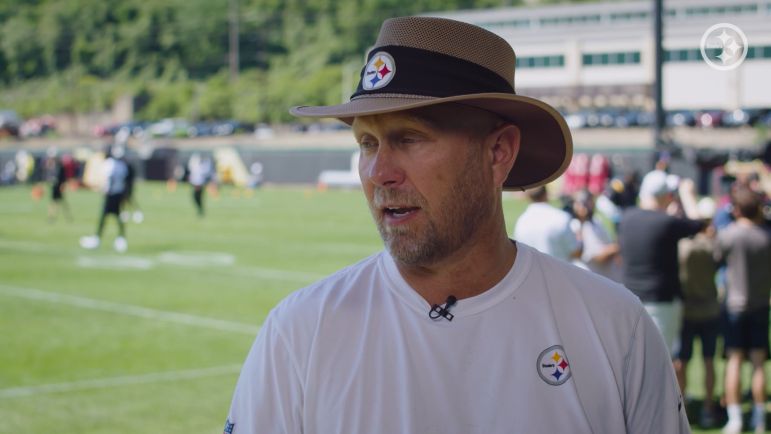 A headline I know no one wants to wake up to Monday morning. I’m not saying it’s going to happen. I’m just saying at this point, it would not shock me to see Matt Canada back in the booth as the Pittsburgh Steelers’ OC in 2023. Something that didn’t feel on the table after the first five games of the season. I’ve been as critical of Canada as anyone, though I’ve always tried to be specific in my criticism, but if you were the defense attorney in the “should Matt Canada be fired?” trial, there’s a case to make.

Here are the reasons you shouldn’t be so surprised come next season.

1. Players Are At Fault, Too

It’s easy and fun and trendy to blame Matt Canada for everything wrong with the Steelers’ offense. Of course, he’s in charge of that unit and anything they do is a reflection of the coaching staff. But Pittsburgh’s problems reside with the players as often as they do the coaching. Over the last month, I’d tip the scales in terms of players making more mistakes than coaching and schematic breakdowns. Have there still been problems? Sure. Canada’s offense is too reliant on out-breaking and sideline routes, limits too many YAC chances, and the offense is still paper-thin and doesn’t dress up concepts to create quality constraint plays. All of that is a fair critique of Canada’s job.

But this offense has had so many missed assignments and in more recent weeks, back-breaking penalties. The screen game failures against the Bengals? That’s on players. They were fine and well-timed calls. Even the flea flicker, on paper, looked good. Players got open. Execution tanked the play. Penalties have hamstrung this team as much as anything. And of course, this team has been playing through the season with a rookie quarterback for most of it, sometimes making rookie quarterback-like plays, with an offensive line that’s been better than expected but still a below-average unit leaguewide. Those are things to put on Mike Tomlin and the front office, not directly on Canada.

Schematically, Pittsburgh still isn’t good but watching them isn’t as rage-inducing as it was at the start of the year. Maybe that’s enough.

Granted, I wouldn’t expect Tomlin to throw his OC under the bus. But he’s certainly gone to bat for Canada when given the chance. Even though it would’ve been justifiable to fire Canada following the team’s embarrassing 35-13 loss to the Philadelphia Eagles heading into the bye week. But days later, Tomlin made it clear he wasn’t making any coaching changes and the whole group has remained intact.

Last weekend’s failed flea flicker is another great example. Tomlin was asked about the play and praised the principle of the call, saying it was well-timed and faulted, to return to the first point, the execution of it. Here’s what he said during the most recent The Mike Tomlin Show.

“I thought it was awesome to be quite honest with you,” Tomlin told host Bob Pompeani. “The time in which we did it, we did it after an earned first down.”

Again, Tomlin’s been around the block long enough not to go throwing his assistants under the bus. But rarely has he even hinted at frustration with Canada even given ample chances to do so.

3. What About His Contract?

Coaches’ contracts aren’t made public the way players’ are so this involves a bit of guessing and tea-leaf reading. While Canada’s contract is not certain, it’s generally believed that coordinators in Pittsburgh receive three-year deals while positional coaches receive two. For example, RBs Coach Eddie Faulkner, hired in 2019, signed a two-year extension after the 2020 season, meaning his initial two-year deal was up and he signed another two-year pact. Former OC Randy Fichtner lasted three years in Pittsburgh and wasn’t officially “fired,’ instead the team announced a “parting of the ways,” Ditto with Todd Haley, in Pittsburgh for six seasons, ostensibly two separate three-year contracts.

So I assume Canada received a three-year deal, with an obvious pay raise, once promoted from QBs Coach to OC for the start of the 2021 season. Meaning, his extension runs through the 2023 season. For most teams, that’d be inconsequential. But Pittsburgh doesn’t fire coaches. Not mid-season (unless they leave for Oregon) and not after the season. Former special teams coordinator Al Everest is about as close as you’ll get to an in-season move, fired right before the start of the 2012 season while OL Coach Jack Bicknell Jr. lasted just one year in Pittsburgh. But an OC or DC to be actually fired? Tim Lewis is probably the last example all the way back after the 2003 season while Ray Sherman was the most “recent” on the offensive side of the ball after a tough 1998. Of course, that was well before Mike Tomlin or even Kevin Colbert arrived.

Point is, history says coordinators stay in Pittsburgh for at least three seasons. For better or worse. You could argue 2023 is the prove-it year with more stability at quarterback, no in-season change and switch to a rookie for a young and new group still trying to figure things out. In a limited sample size, the Steelers are averaging 25 points per game in the two weeks since the bye and the offense has made strides even if they’re still a long ways off. Pittsburgh could decide to stop with the coaching turnover with three o-line coaches (the run-game coordinator) in three years and a would-be second offensive coordinator in three years should they move on from Canada. That’s plausible.

I’m not saying Canada is going to stay. I’m saying I’m not sure. Starting tonight, the next seven games could write his future. If the offense keeps making strides, obviously, the odds of him staying on staff another year go up. Regardless, don’t rule out the chance Canada is back at his post next season. It’ll be much to the chagrin of Steelers Nation but if there are anything fans are used to, it’s the Steelers trying to stay status quo.