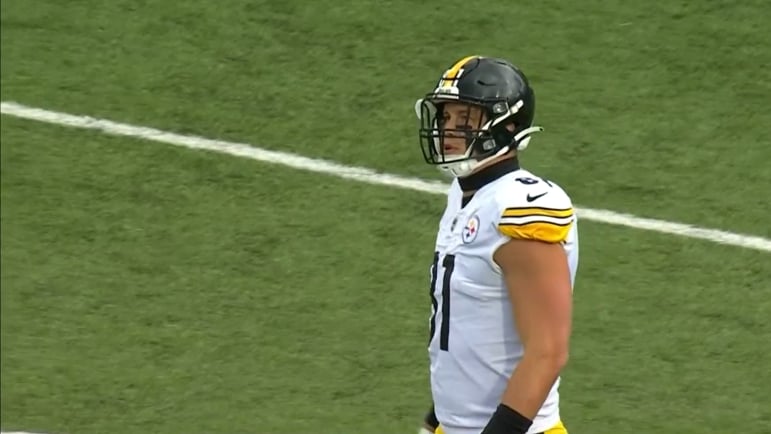 The Pittsburgh Steelers were a much different team in their final eight games of the season than they were in their first eight. Across the board, the team improved after their bye week and they played meaningful football the entire season. While they’ll miss the playoffs with a 9-8 record, tight end Zach Gentry talked about the improvements the offense in particular made toward the end of the year.

“Tremendously improved. I mean you see from that bye week break how much better we were. You can attribute that a lot to the young guys growing up – a lot less mental errors, a lot more knowing what you’re doing kind of as a whole and meshing together. So, I think there are big things in store for this organization going forward,” Gentry said via official transcript provided by the team

The young offense certainly improved as the season went on. Rookie quarterback Kenny Pickett cut back on interceptions and made smarter, safer throws and better reads. As he got healthy, running back Najee Harris improved from his disappointing start and was able to run for over 1,000 yards for the second year in a row, while wide receiver George Pickens continued to show off his incredible body control and big play ability.

It’s exciting to think about the future, and Gentry clearly believes it’ll be a positive one for the Steelers, who finished the season with four straight wins. It’s one that he might not be a part of though, as the tight end is an impending free agent. He talked about the free agency process, being curious to see his market and his love for the Steelers organization.

“I don’t know who wouldn’t be,” Gentry said about being curious to explore the open market for the first time in his career. “It just depends. I have so much love for this organization and the people who are here, so it’s going to be quite the process, quite the journey. I’m just intrigued to see how it goes, what happens.”

If Sunday was Gentry’s last game in a Steelers uniform, he closed out his career with a 23-yard first-down grab. Gentry caught the final pass of Ben Roethlisberger’s career, and he’s been a nice contributor as a backup tight end over the last two seasons after providing minimal production over his first two. He has 38 receptions for 299 yards, including 18 first-down receptions from 2021-22 and he’s taken strides to become an effective blocking tight end.

I can’t imagine the price to bring back Gentry will be all that steep, but it really depends if the Steelers think there are better options in free agency or the draft and if Gentry wants a bigger role. There’s no way he’s going to pass former second-round pick Pat Freiermuth on the depth chart, and third-string tight end Connor Heyward saw a bigger role in the receiving game down the stretch. It’ll be interesting to see if the Steelers ultimately end up bringing Gentry back, but I certainly think it’s something they should consider. The tight end room of Freiermuth, Gentry and Heyward seemed to work well this season, and I don’t necessarily think a better backup tight end is a huge need. Gentry’s market will definitely be something to watch this offseason.