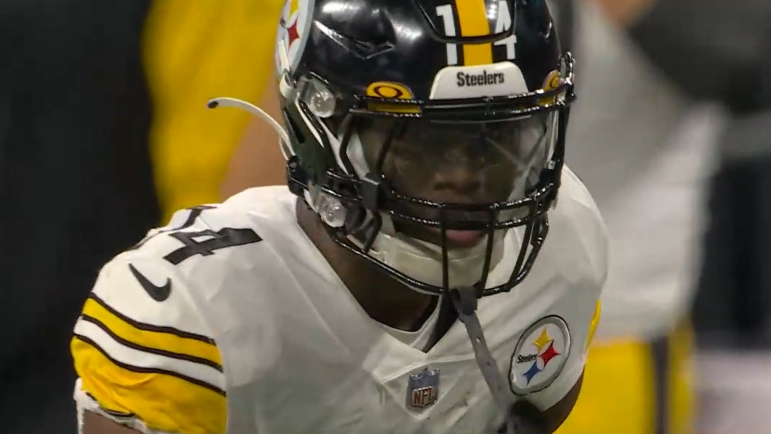 Mike Tomlin has always been quick to defend WR George Pickens. He enjoyed a largely positive rookie year, drawing rave reviews for his highlight reel grabs and immediate impact to the Pittsburgh Steelers’ offense. But there were critics who concentrated on his sideline outbursts, upset when he didn’t make a play or get the ball.

During his year-end press conference, Tomlin expounded on why he’s stood up for Pickens time and time again.,

“I sometimes get resistant when I get asked about his maturity and character related things because oftentimes I believe he got mischaracterized pre-draft,” he said via the team’s YouTube channel. “That’s why I’m combative at times and defensive when it comes to him. He’s a quality young man. He is. He’s professional. He’s been really consistent in his work throughout. He loves football. He likes to work. We haven’t seen a lot of things that we hear rumors regarding in terms of him, and that’s why we defend him.”

Pickens had that “red flag” label coming out of Georgia. The roots of it are unclear but it likely stemmed from sideline altercations with opponents. The time he squirted a water bottle at a Tennessee player. Or his ejection after scuffling with a George Tech defender. Maybe it comes from his quirky and unique personality, the balaclava mask he almost always wears, including during draft night where he became an instant meme.

But in the grand scheme of things, those are minor events and Pickens has done nothing to suggest serious concerns. In Pittsburgh, he’s vented frustration over dropping passes or not getting the ball, the latter most evident in a win over the Atlanta Falcons in which Pickens was visibly upset throughout the game. But a receiver content with not getting the ball is called a tight end. It’s practically baked into the DNA of any wideout worth their weight.

Those moments aside, Pickens enjoyed a strong rookie year. Despite playing in a run-heavy offense that swapped out quarterbacks early in the year, he finished with 52 receptions for 801 yards and four touchdowns. As expected, his usage ebbed and flowed but he ran a more diverse route tree from different alignments as the season progressed, his final two touchdowns coming from the slot instead of the outside. He could even garner a handful of Rookie of the Year votes though he’s likely to lose out to WRs Chris Olave and Garrett Wilson and RB Kenneth Walker.

“I think he progressed in the ways that most of the rookies progress,” Tomlin said. “I just think it’s a natural thing when you’re a young guy and you get put into a professional environment around grown men that you grow and grow at a rapid rate. I saw that from him. I thought the consistency of his play and his productivity kind of represented that growth. But it’s a really natural thing.”

Pickens will use 2022 as a springboard into 2023 as the team’s starting receiver opposite Diontae Johnson. Pickens should see more consistent targets and a higher volume as a sophomore as he evolves, the Steelers’ quarterback situation settles, and the pass game perhaps opens up a bit. He’s in line for a 1000 yard season in 2023 and cementing himself as one of the best vertical threats in football.