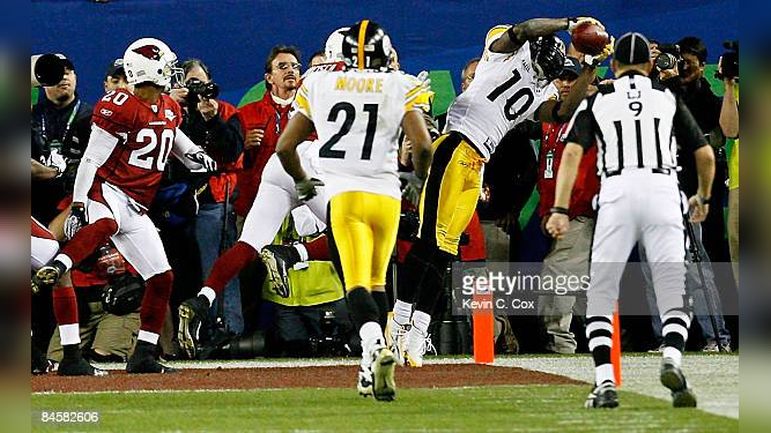 Santonio Holmes will forever live in Pittsburgh Steelers lore. His toe tap grab in the back of the end zone to score the game winning touchdown in Super Bowl 43 is one of the most iconic plays in NFL history.

But, not everyone knows that Holmes had a chance to make a much easier catch just one play earlier on the other side of the end zone. On first and goal quarterback Ben Roethlisberger found Holmes in the left corner of the end zone but Holmes inexplicably dropped what would have been a routine touchdown. You can watch the drop at the 2:08:32 mark of the video linked.

On Sunday, Holmes sat down with Arthur Moats at Acrisure Stadium and talked about what was going through his head after he dropped the pass.

“I had in the back of my mind that I blew the game,” Holmes told the crowd in a video posted to Arthur Moats’ YouTube channel. “All I could think about is I let everyone down at home, I let my team down, and I was not focused on that moment like I should have been. So when we got back to that huddle and all my teammates were standing there staring at me just giving me that death stare, Heath [Miller] tapped me and said ‘Hey Tone, don’t worry about it. He’s going to throw you the next pass.’”

On that drive, Holmes was the hot hand which makes sense why Roethlisberger would target Holmes again. Before the touchdown grab Roethlisberger and Holmes connected three times for 67 yards. After the game winning touchdown pass that total jumped to four times for 73 yards.

Happy 36th birthday to Santonio Holmes (@ToneTime10). Never will forget this great catch in Super Bowl XLIII as long as I live.

That's how you be great!!!#Steelerspic.twitter.com/3gydvoiytu

Holmes, the Super Bowl M.V.P., finished he game with nine catches for 131 yards and the game winning touchdown. One thing Roethlisberger was known for throughout his career was letting his playmakers make plays. Whether it was Holmes, Antonio Brown, or Diontae Johnson, he would always trust his receivers to make difficult plays. He did so in the Super Bowl and it certainly paid off, helping Pittsburgh lift their sixth Lombardi Trophy.

Holmes’ retelling of the story of what happened that famous night was really cool and insightful. Almost everyone knows about his catch but not many knew about how he was feeling after his well forgotten drop. It’s so forgotten that is is hard to find a video of it by itself on YouTube. They say winning cures all aliments, well, making the game winning catch in a Super Bowl definitely helps people forget about a drop just one play earlier.