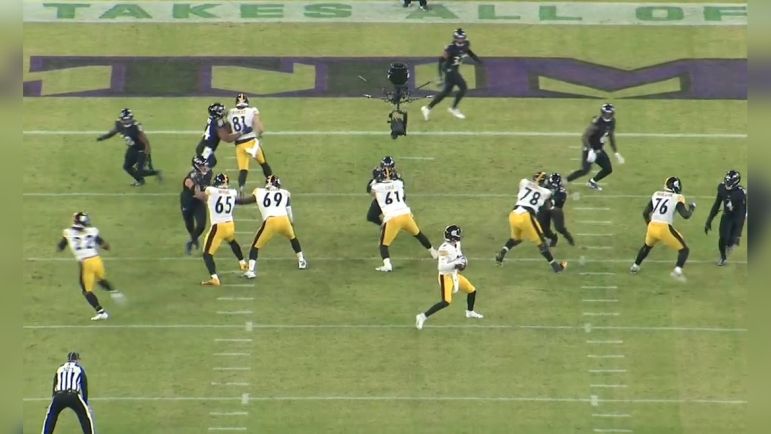 For all the concerns over the Pittsburgh Steelers’ offensive line entering this season, many of which were justified, they’ve been a steady group. One on the “upswing,” as Mike Tomlin said after the team’s Sunday night win over the Baltimore Ravens.

The team’s biggest prize added in this free agency was OG James Daniels. A young but experienced player in Chicago, Daniels played poorly in camp and preseason, adjusting to OL Coach Pat Meyer’s rules of the road when it comes to pass protection. But after those summer struggles, he’s become the team’s best lineman this year. And that’s not just the “low bar” award like recent seasons past. Daniels has been legitimately good among a unit that’s making strides.

Today, I’m focusing on Daniels’ pass protection and how he’s gotten comfortable with what Meyer wants from him.

Back in the offseason, we broke down one of Meyer’s coaching clinics that outlined how he coaches his guys to pass protect. Generally speaking, he teaches aggressive sets. Don’t give ground, don’t back up. “Bring the fight to them” is his motto.

Against “on-body” sets where a defender’s inside leg is inside of the guard’s outside leg, the Steelers’ linemen take their most aggressive set. They don’t just set flat, they come forward a half-step with the goal of making “first significant contact”

Let’s dig into the tape. Here is Daniels, #78, against the 3-tech who is “on his body. Inside leg to the inside, or “on”, Daniels’ outside leg. This demands an aggressive set. On the snap, Daniels fires off the board and comes forward with a good punch to get hands inside and take control of the block.

The 3-tech bull rushes and uses power but Daniels is able to stall it out. He uses the Meyer-taught “hop step,” giving some ground to anchor. It’s a little messier than a “true” hop step but the last two hops have him leaving his feet and stalling the rush out. Just like it’s taught. Might not always look pretty but he stays engaged and keeps the pocket clean (Pickett is a little skittish running though he was also looking to throw back-shoulder to Najee Harris here, too).

Same thing here. On-body set, this time against the 1-tech. Strong punch to make first contact, Daniels has this odd-looking punch that starts with his hands very wide before working inside, and he takes control of the block. A quick and easy win, just the way Meyer wants it.

Before I show the clip below, here’s an overhead screenshot of Daniels’ set. Watch him come forward here compared to any of the other linemen. That’s what Meyer wants in an “on-body” set. 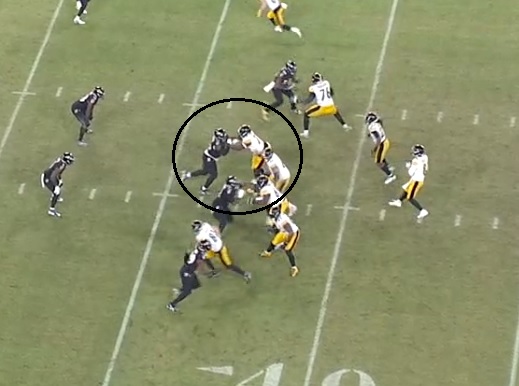 One more example talking about the same thing. Being a quality offensive lineman is finding consistency in technique and results and Daniels was consistently good throughout the game against these on-body sets. Good first contact here on Daniels’ punch and the defender’s rush is over before it begins. Daniels is the man in control of this block.

A similar look here with an interesting footnote. Against the 3-tech, you see Daniels and the defender grapple with their inside hands mid-rush. But Daniels has good placement with his right, outside arm to maintain contact and slow the rush down. He ends with two hop steps to stall and anchor, which is about as many as Meyer says linemen need to stall it.

Finally, a broader look at the line. Stunt pickup has been an issue for the team this year especially as defenses get more multiple, less static, and more chaotic. Nice job by the interior offensive line here, LG Kevin Dotson, C Mason Cole, and Daniels at RG.

#92 slants/crashes while #99 loops over the top. Daniels secures the interior A gap first, passing #92 off to center Mason Cole, before coming off the block and picking up #99 looping around into the B gap. Cole and Dotson do their jobs too, the three working in sync. Together, they keep the pocket squeaky clean for Pickett, who rips a dart over the middle to George Pickens for 14 yards on 3rd and 14.

Daniels’ game has evolved over the year as he’s gotten comfortable working in this system. It’s a similar story with the rest of the line, though RT Chukwuma Okorafor has looked the most comfortable since day one and didn’t have the growing pains of others. Being the longest-tenured player with the team doesn’t hurt. Daniels has been well worth the hefty contract he got this summer and should be a fixture on this line for years to come.