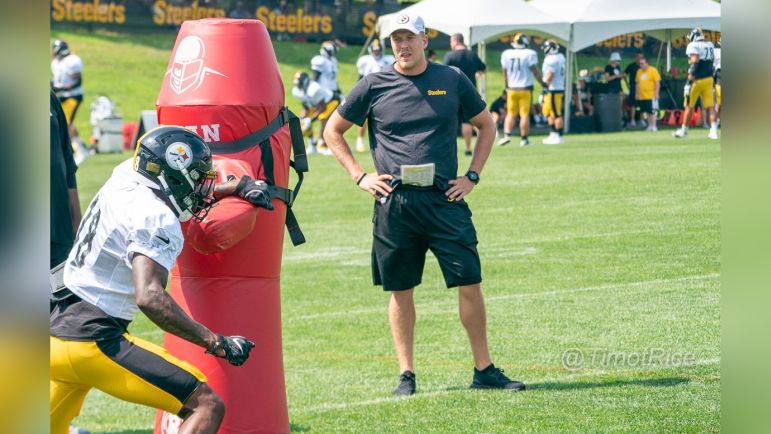 The Pittsburgh Steelers’ coaching staff will have at least one difference next season though it won’t be replacing OC Matt Canada, who will return next season. The team is losing assistant coach Blaine Stewart. According to the PPG’s Gerry Dulac, Stewart is leaving to take a job at West Virginia.

“Meantime, assistant receivers coach Blaine Stewart is leaving to join the staff at West Virginia, according to a source.”

Stewart is the son of the late Bill Stewart, who coached- at West Virginia from 2000 to 2010 so the connection here is obvious.

The Steelers hired Blaine in February of 2018. He’s worn several hats as an assistant coach. He’s worked closest with the team’s wide receivers and served as a co-wide receivers coach with Ray Sherman in 2019 following the sudden death of Darryl Drake during training camp. Stewart has also worked closely with STs Coordinator Danny Smith on special teams.

We noted Stewart as a rising star on the Steelers’ staff back in 2020, writing at the time and noting that back then, he was in discussions to take a job at WVU.

“Stewart was in discussions to take the WR coach job at West Virginia this year before that fell through at the last minute. Stewart and Ray Sherman took over the role of WRs coach in Pittsburgh this past year following Darryl Drake’s death.

He’s a bright, offensive-minded person who like Martin, snagged a coaching gig at this year’s Shrine Game. Stewart worked with the West Teams QBs, showing his versatility in coaching up multiple units. I think this time next year, he has a position coach role somewhere at the college level. West Virginia, Penn State, maybe his alma mater of James Madison. But somewhere.”

It’s likely the COVID pandemic slowed down some of those plans to leave and Stewart remained in Pittsburgh. The team will likely look for his replacement, someone who can help out in multiple areas. So far, that is the only known change to the coaching staff, though Defensive Assistant/Linebackers Coach Brian Flores has interviewed and been requested to interview for multiple jobs. It wouldn’t be a surprise to see him leave this offseason either.