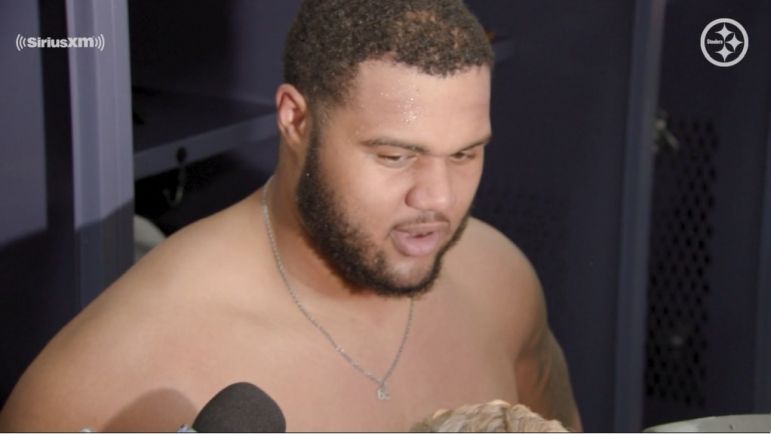 All the Pittsburgh Steelers needed was to believe in themselves. Nothing else mattered. And this young group of guys figuring it out along the way sure have a lot of heart. Speaking to reporters after another thrilling victory, LT Dan Moore Jr. says he felt the confidence and energy ahead of the final drive.

“Man, energy,” Moore said via Steelers.com about what the huddle was like before the drive. “Energy. It was almost like we had the confidence. Like we knew we were gonna go down there and score.”

And score they did. Eleven plays and 80 yards later, Kenny Pickett found Najee Harris on a scramble drill for the game-winning score. Pittsburgh’s the cardiac kids, always have been, always will be, but winning is all that matters this time of year. Two must-win games against the Las Vegas Raiders and Baltimore Ravens aren’t just proving the Steelers to the viewing public. They’re proving it to themselves.

For such a young and new team, that’s as important as anything. Belief in theory is one thing. Belief based on results and experience is another. So much more effective and important. The Steelers aren’t just talking the talk about winning big games. They’re walking the walk. Despite all the circumstances, many of them self-mad by early-season errors, the Steelers find a way to battle and persevere. Moore and the Steelers’ line took care of business, running for 198 yards while keeping Pickett clean in the pocket.

At their lowest point, they were 2-6, entering the bye coming off a blowout loss to the Philadelphia Eagles. After a post-bye win against the New Orleans Saints, they again dropped to four games under to the Cincinnati Bengals, sitting at 3-7 with playoffs a distant thought. Even after losing the first meeting to the Baltimore Ravens, dropping Pittsburgh to 6-8, it was hard to have hope. But Pittsburgh’s at their best when their backs are against the wall and since then, they’re 3-0.

Now, the playoffs are in the Steelers’ vision. It’ll still take a win against the Cleveland Browns and additional help but the path is very real. There’s energy. There’s confidence. There’s hope. All renewed to start 2023. What a start to the year.