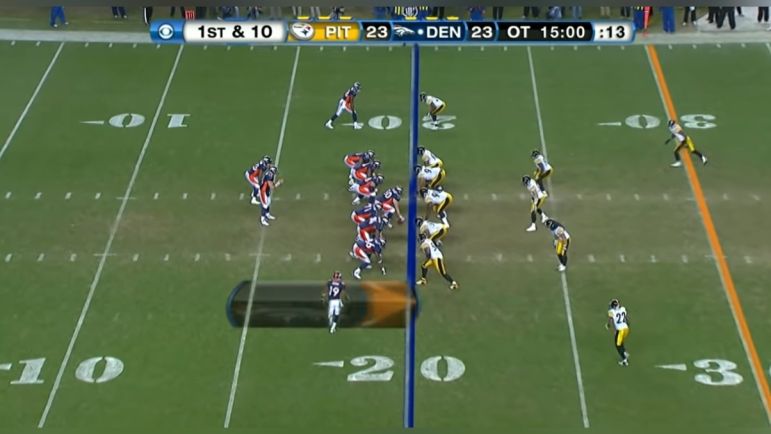 As Cam Heyward watches on during Wild Card weekend, his memories jog back to his first experience. One that didn’t have the happy ending that he wanted. Heyward’s first playoff game was one of the toughest losses the Steelers have suffered over the last 15 years, losing to Tim Tebow’s Denver Broncos in overtime of the 2011 playoffs.

Appearing on NFL Network before this year’s slate of games kicks off, Heyward recalled his dream turning into a nightmare.

“I wasn’t starting at the time,” Heyward said. “And then what? Casey Hampton got hurt. Brett Keisel got hurt. And so I’m thrown out there, we got three d-linemen in the game and that’s all we got. And so we’re going to play Tim Tebow. He’s Tebowing, right? He’s doing his thing, right? Demaryius Thomas, you know the touchdown at the end.”

Steelers’ fans know that touchdown all too well. Tied at 23 heading into OT, the Broncos won on the first play from scrimmage, Tebow hitting Thomas left side for an 80-yard touchdown, beating Ike Taylor and ending the Steelers’ playoff hopes in an instant. I won’t make you watch it but for those who dare, here’s the play again. I know it’s already burned into your brain.

“Man, that was a tough way to take in your first playoff,” Heyward said.

Despite playing on the road, Pittsburgh came into the game as heavy favorites. They were 12-4 in the regular season to Denver’s 8-8 mark, squeaking in by winning the AFC West. Tebow, the team’s first round pick in 2010, had taken over as starter but struggled throughout the regular season as a passer, completing well under 50% of his passes and throwing just 12 touchdowns in eleven starts. But the Steelers played sloppy football and allowed the Broncos to hold the lead throughout much of the game. Pittsburgh took the game into overtime with a 31-yard touchdown grab by WR Jerricho Cotchery. But after the opening touchback, Denver needed just one play to shatter the Steelers’ dreams.

As Heyward said, he played far more than expected in that game. As we wrote back at the time, the little website that could, Casey Hampton suffered a knee injury while Brett Keisel hurt his groin. The offense didn’t come away unscathed with OT Max Starks also going down in that game, the injuries piling up on top of the loss.

Unfortunately for Heyward, his playoff success hasn’t gotten much better. His Steelers are just 1-6 in the playoffs when he’s played and he’s never played in a game past the Divisional Round which was another loss to Denver later in his career. Pittsburgh made it to the Title Game in 2016 but Heyward missed the postseason, placed on injured reserve during the regular season.

About the only thing missing from Heyward’s resume is playoff success. He doesn’t control it alone but it’s the last box he needs to tick. Or else his biggest playoff memory will be his first, watching Demaryius Thomas run 80 yards to end his and the Steelers’ season.