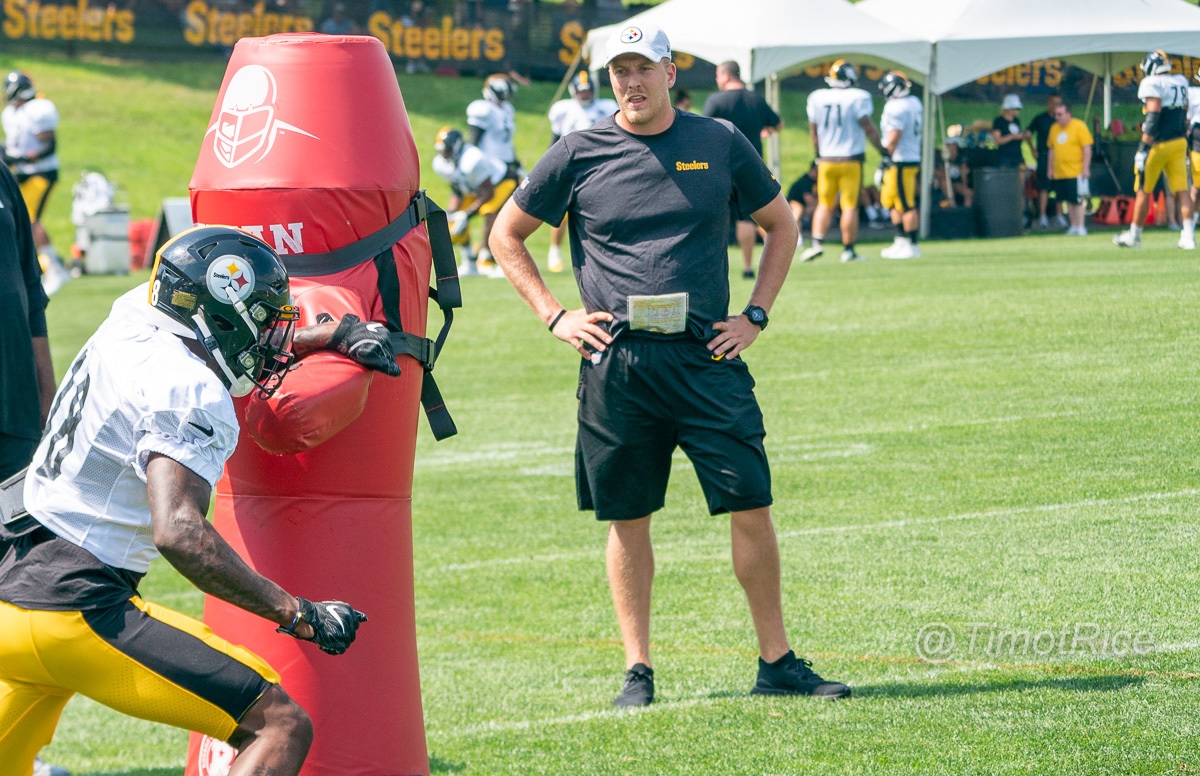 The Pittsburgh Steelers lost assistant wide receivers Blaine Stewart earlier this offseason, as the former James Madison and University of Charleston wide receiver went to the college ranks to take a job as tight ends coach at West Virginia University, where his father, Bill, served as the head coach from 2008-2010. In his press conference today, current West Virginia head coach Neal Brown shot down any talk that the younger Stewart’s hiring had anything to do with his father and credited Steelers head coach Mike Tomlin for developing Stewart.

He also said that multiple other staff members recommended Stewart for the job, and his personal experience watching Stewart work with veterans during Pittsburgh’s OTAs made him a good fit for the job.

Welcome back to #AlmostHeaven, @CoachBlaineStew!

Stewart served two years as a coaching assistant with the Steelers before being promoted and spending three years as the assistant wide receivers coach. Following the death of former wide receivers coach Daryl Drake in 2020, Stewart along with Ray Sherman took over the post. He also coached the quarterback’s during the 2020 East-West Shrine Bowl, expanding his offensive coaching knowledge.

Stewart is from Morgantown, West Va. and obviously grew up around the program given his father’s status as an assistant and then head coach for the Mountaineers. It’s a natural fit for Stewart and a role he should excel at as he continues to gain experience as a coach. Brown also acknowledged that recruiting will be a new avenue for Stewart to learn, but on the football side of the ball, Brown said that Stewart could be a “star” at the collegiate level.

“If you can relate and coach the way he coached the professional athletes, he’s going to be a star at this level.”

Given that Stewart is still young, there’s no doubt that he can rise through the coaching ranks and potentially make a name for himself in the coaching world.

It’s also interesting to hear Brown give credit to Tomlin and how he’s benefitted the program. Given the proximity between Pittsburgh and Morgantown, when Brown goes to watch OTAs or NFL workouts, one of the places he’ll go is Pittsburgh. For a collegiate staff to be around and learn from Tomlin is obviously a benefit, but it’s clear how much Brown values his input when he talks about the benefit Tomlin has given the West Virginia program.

It remains to be seen who the Steelers bring in to fill Stewart’s vacancy on the coaching staff, and it’ll be fun to watch Stewart in his new role and see if he can become the star that Brown believes he can be.