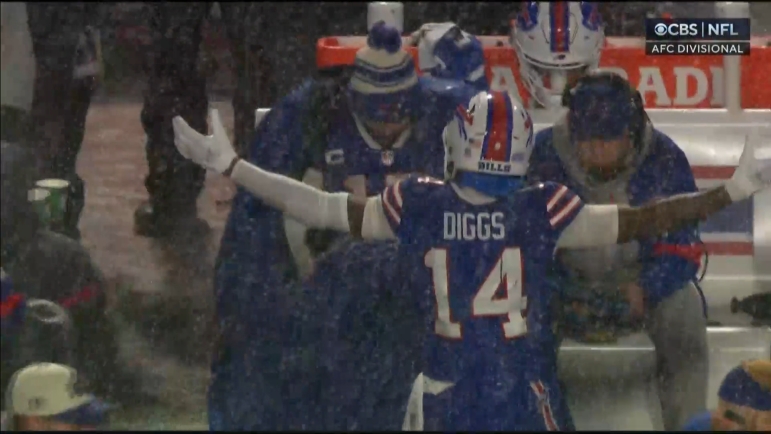 There was a time that former first-round cornerback Eli Apple was best known for getting dropped off to his first NFL practice by his mother. It wasn’t too long after that, just a few short years, that he got slapped with the ‘bust’ label. While he’s rebounded and found a home for himself with the Cincinnati Bengals, it may still not be the case that his play is his most notable feature.

Indeed, it would seem instead to be his trolling, as he frequently seems to have plenty to say after the Bengals win, especially in the postseason. This weekend’s win over the Buffalo Bills was no exception. Charged by Pro Football Focus with allowing four catches on seven targets for 74 yards (including a 32-yard completion to Dawson Knox and a 25-yarder to Gabriel Davis) he nevertheless held Stefon Diggs without a catch the two times he was targeted while covering him.

Diggs has been almost as big a part of the Bills’ transformation as Josh Allen has, but they continue to come up short of reaching the Super Bowl. The receiver has made sure to take in each postseason exit, and it’s been noted widely—including by Apple, who trolled him for it. But last night he was especially interested in prodding Diggs for being upset with his quarterback after a lackluster game.

“Someone get them in couples therapy”, he Tweeted at Diggs and Allen, offering to pay for it, while quote tweeting a video from the broadcast showing the receiver upset with his quarterback, who was sitting on the bench with his head down.

Hours earlier, he quote tweeted another video showing the two Bills stars doing an elaborate pre-game handshake, writing, “They ain’t do this after the game”.  He proceeded to retweet numerous Tweets by Diggs commenting on his actions during and after the game, unapologetic about being upset about his performance and that of his team and saying that he shouldn’t be okay with it.

If there are any Bengals fans reading this, I would be curious to know what they make of Apple and his engagement in trolling such as this. For starters, does his own performance justify this level of mockery on his end? He even retweeted a TikTok clip showing him mocking Diggs while he was down on the ground by simulating tears.

Apple started 15 games this season for Cincinnati, registering 49 tackles with zero interceptions and eight passes defensed. He has 12 tackles through the team’s first two preseason games and one pass defensed.

He was originally brought in as depth in 2021, but got pushed into the starting lineup due to injury. He started 15 of 16 games that season, but struggled to cover Cooper Kupp to devastating effect in the Super Bowl, one of the biggest reasons the Rams won the game.