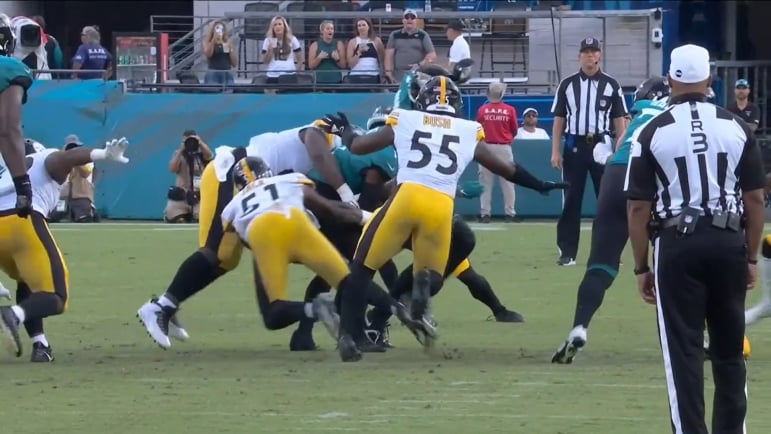 Short of veteran free agent signing Myles Jack and rookie seventh-round draft pick Mark Robinson, every single one of the Pittsburgh Steelers’ inside linebackers from the 2022 season is due to be an unrestricted free agent in March. And when it comes to Jack, his heavy 2023 base salary is a question that needs addressing.

In other words, this offseason poses a striking opportunity to evaluate the position and decide whether to continue with what the Steelers have or look to make changes. Both Devin Bush and Robert Spillane have essentially rotated as starters. Jack’s impact was somewhat muted considering he comes with an $8 million price tag next year.

What should the Steelers do to address the inside linebacker position? Pittsburgh Post-Gazette beat writer Ray Fittipaldo has an opinion on that, one that he shared in his latest chat session earlier this week. Perhaps it will surprise you, but he favors the team staying put, as he said when asked if a free agent was more likely at ILB or CB.

“Are they signing a free agent if they keep Myles Jack? Probably not”, he said. “He has an $11 million cap hit, but I’d probably bring him back along with Spillane and Bush and draft an ILB to groom behind that trio”.

That trio combined for zero interceptions, zero forced fumbles, zero fumble recoveries, and one ‘sack’, recorded by Spillane in the season opener against the Cincinnati Bengals. It was credited as a loss of zero yards, I believe as Joe Burrow ran out of bounds. So not much of a sack, as memory serves.

Bush played the 2022 season under the terms of the final year of his rookie contract, with a base salary of just over $3 million. Spillane played under a restricted free agent tender value of about $2.4 million. Although Jack had only a $1.5 million base salary with a cap hit of under $5 million, he signed a two-year deal worth $16 million.

His cap hit if his contract is untouched would be $11,250,000 in 2023, including $3,250,000 in proration stemming from the $6,500,000 signing bonus that he was given. That is how the Steelers traditionally structure deals to minimize first-year costs. That way the cash flow for the player remains steady (he pocketed $8 million in 2022 and would do the same in 2023 with his $8 million base salary), but it causes decisions to be made as the deal progresses.

Jack struggled with injuries late in the year, missing two games and limited in others, but he still led the team with 104 tackles. He only had three tackles for loss, however, with one quarterback hit and three passes defensed.

Is that worth $8 million, which is what the Steelers would save both in cash and cap if they were to release him? That’s what they will have to decide this offseason. And that has to be judged based on what they expect him to deliver in 2023, not what he delivered in 2022.

As for Bush and Spillane, what will their markets be like? Somebody like Spillane can have special teams value (think a rich man’s Tyler Matakevich). As for Bush? He may have to look for someone eager to take on a redemption project. If either or both can be retained relatively cheaply, it’s not an absurd notion, but they could do well to consider their free-market alternatives.