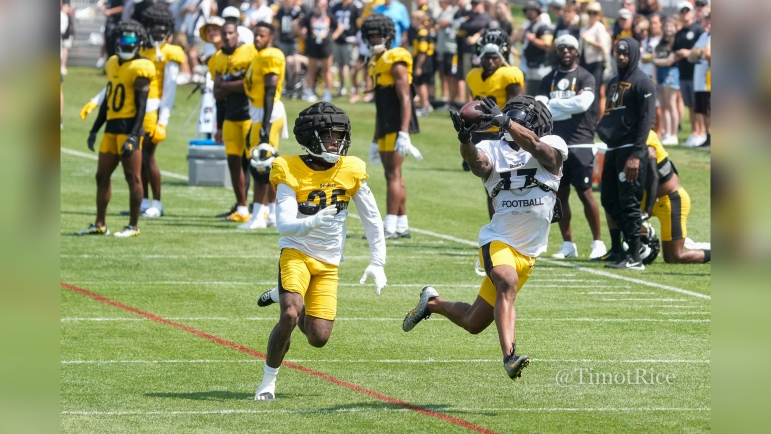 Things started out rather well in training camp last summer at Saint Vincent College in Latrobe for veteran wide receiver Anthony Miller. In a relatively crowded wide receiver room featuring the likes of veterans Diontae Johnson, Chase Claypool, Steven Sims, Miles Boykin and Gunner Olszewski, not to mention rookies George Pickens and Calvin Austin III, Miller got off to a fast start and appeared to be in place to grab a roster spot.

Then, disaster struck for the veteran receiver, who suffered a significant shoulder injury in training camp and missed the entire 2022 season while on Injured Reserve. Good news for Miller though is that he showed the Steelers enough in that training camp setting to warrant receiving a one-year deal Tuesday, adding him back into the mix in a receiver room that is lacking depth entering the offseason.

For rookie receiver Calvin Austin III, having a guy like Miller back on the team after missing the entire 2022 season will do wonders for a young receiver room in need of some leadership and experience behind Johnson.

“A guy like Ant, he’s definitely someone you would want to stick around,” Austin, who also spent the season on IR with Miller, recently told the Tribune-Review’s Chris Adamski. “He obviously came from two other teams, so he provides a lot of leadership and instruction and advice. I see him talking to (star rookie receiver George Pickens) about running routes but also just on life in general.”

A veteran of five seasons in the NFL after being a second-round pick in the 2018 NFL Draft out of Memphis by the Chicago Bears, Miller started out fast with the Bears, turning in a 33/423/7 stat line as a rookie in the Windy City, which followed up an All-American season at Memphis where he hauled in 96 passes for 1,462 yards and 18 touchdowns.

Had a lot of time to sit back and really observe the game. Learned even more than I already knew. Can’t wait to get back out there again 🥷🏿

After that strong rookie season, Miller then recorded seasons of 42 and 49 receptions but then was surprisingly traded to the Houston Texans ahead of the 2021 season before being ultimately released after appearing in two games. That ultimately led to him landing with the Steelers.

He spent the entire 2021 season on the practice squad, appearing in one game as an elevation, hauling in one pass for two yards in the black and gold against the Cincinnati Bengals.

Then, he had a shot to be on the train leaving the station, as head coach Mike Tomlin likes to state, but suffered the shoulder injury. The injury didn’t stop him from making an impact within the room, like Austin pointed out.

He’s been around the block, knows the game and can play the position at a serviceable level, able to play in the slot or on the boundary, while also adding special teams abilities in the return game. It made sense that the Steelers brought back the versatile, experienced receiver to add depth and overall options to a room relatively light on both.

We’ll see what the 28 year old can do in OTAs, minicamp and training camp while he battles against the likes of Boykin, Olszewski and Sims — should Sims be retained by the Steelers.