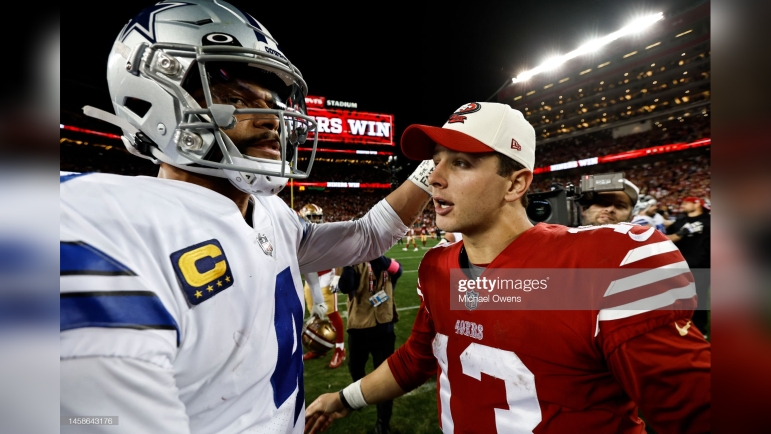 The Dallas Cowboys joined the Pittsburgh Steelers and the New England Patriots last week as the teams with the most postseason victories in the Super Bowl era a week ago with 36. They had the opportunity to break the record yesterday; instead, their opponent, the San Francisco 49ers, joined the club, also winning their 36th postseason game since the first Super Bowl in 1966.

Although this does not mark the all-time NFL postseason wins list, nobody has won more than 36 since the dawn of the Super Bowl, four years before the formal ‘common era’ when the NFL and AFL jointly conducted postseasons, beginning in 1970, the year of Super Bowl V, resulting in a victory of the Baltimore Colts over the Cowboys.

San Francisco’s first playoff victory of the common era (and second ever, the first being in 1949 against the New York Yankees (yes, you read that right) came in that 1970 season when they defeated the Minnesota Vikings in the divisional round, but they would fall to the Cowboys in the conference finals. They reached the conference finals again the following year, again losing to the Cowboys.

In fact, the Cowboys eliminated them three years in a row, coming in the divisional round in 1972, but they finally got over the hump in 1981, taking down Dallas in the conference finals before defeating the Cincinnati Bengals and claiming their first of five Super Bowl titles.

By then, the Steelers had already won their first four trophies, at the time two more than anybody else in NFL history. They had a 14-5 postseason record with Terry Bradshaw at quarterback and guided by head coach Chuck Noll. Wins became scarce until Ben Roethlisberger was drafted in 2004, who would guide the franchise to another 13 wins.

As for the Patriots, well, their postseason history overlaps strikingly with that of quarterback Tom Brady. He won 30 of their 36 postseason games of the Super Bowl era (their first postseason victory coming in 1963 in the divisional round against the Buffalo Bills).

The Cowboys, like the Steelers, have two prominent eras, with that of Tom Landry and Roger Staubach in the 1970s and then with the ‘triplets’ of Troy Aikman, Emmitt Smith, and Michael Irvin, primarily under Jimmy Johnson.

Of the four franchises, neither the Steelers nor Patriots qualified for the postseason this year. The Cowboys’ last postseason win prior to earlier this year was in 2018. The 49ers were in the NFC Championship game just last year, however. They have reached at least the conference finals in their past six playoff appearances, reaching the Super Bowl twice, but losing.

San Francisco will play the top-seeded Philadelphia Eagles in the conference finals this time around; if they emerge victorious, they will stand alone with 37 postseason victories during the Super Bowl era, and would also tie the Patriots with the all-time postseason wins record.

Not even the Green Bay Packers, whose first postseason victory came in 1936, have more. They already own the record for the most conference finals appearances. With their 18th, they now have a two-game lead over the Cowboys and Steelers.