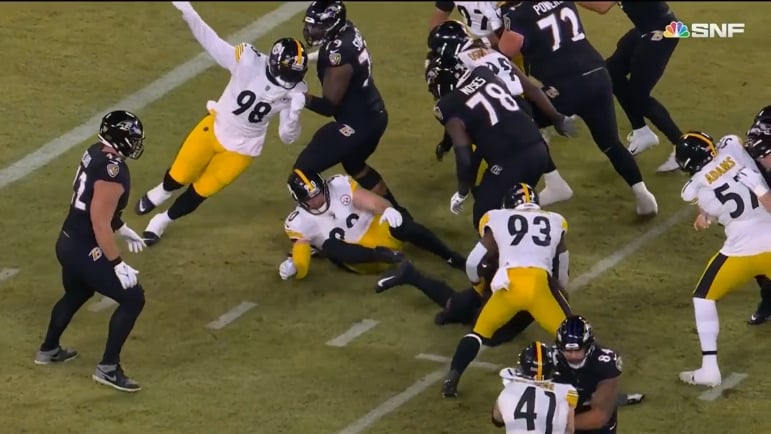 Question: How much will ILB Mark Robinson play in the finale?

Starting inside linebacker Myles Jack only played six snaps on Sunday due to injury. Rookie Mark Robinson was the primary beneficiary of that, logging 26 for himself and earning himself his first official career ‘start’.

When asked on Tuesday what made him comfortable in allowing Robinson to play that role, head coach Mike Tomlin joked, “Who said I was comfortable?”. A raw and unproven rookie, he ended up playing a big role in a game the Steelers had to win.

So how does that translate into the season finale? This game is no less significant. They have to beat the Cleveland Browns in order to have a chance to make it into the postseason. And the Browns’ strengths are the Baltimore Ravens’ strengths: running the football.

The coaching staff likes Robinson’s ability to play forward and tackle the ball-carrier. That’s what he did on Sunday. That’s what Pittsburgh needs to do this upcoming Sunday to keep a lid on running backs Nick Chubb and Kareem Hunt, and to a lesser extent quarterback Deshaun Watson.

Will that be enough justification to get him back onto the field? Because in truth, we can’t even guarantee that he will get a helmet. They chose not to dress certain other players like Malik Reed and newcomer Tae Crowder. Crowder has a good amount of playing experience at the inside linebacker position and has now had some time to learn the defense.

And if Jack is healthier (he did not practice yesterday due to a groin injury), he would presumably see a lot more than six snaps. We don’t know all the reasons that Devin Bush only played five snaps, either. Realistically, we could potentially see Robinson play the majority of the snaps or not even dress.